Used car sales in Europe ended 2020 just 0.4% after an “unseasonably healthy” performance in December helped offset the havoc of the pandemic. 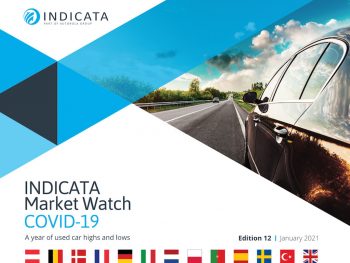 Indicata – which supplied the figures from the 12th edition of its Market Watch report – said it was a remarkable performance.

The 2020 performance was also largely helped by a 4.2% rise in sales across Europe in December.

December’s turnaround performance was driven by the popularity of stock of six-year-old cars and younger. This included a 172% rise in sales year-on-year for battery electric vehicles and a 111% increase in hybrid sales, while sales for petrol and diesel cars remained relatively flat YoY across Europe.

Year-end stock levels were on a par with the start of 2020 despite some vast regional fluctuations, most notably Turkey (+56.1%) and Poland (-16.2%), while average stock turn for all powertrains remained higher in December 2020 compared to the same month the previous year. Stock turn remained faster for diesel and petrol vehicles than alternative powertrains.

Andy Shields, Indicata’s global business unit director, said: “Some dealers are starting to take pricing action and with coronavirus still with us dealers are having to rethink their operating model by watching the market days’ supply (stock turn) for various ages and powertrains and take decisive pricing action.”