By Jonathan Musk / 8 months ago / News / No Comments

Electrified vehicles gain traction despite lockdown and a 78% year-on-year reduction in sales across Europe, notes JATO Dynamics, suggesting that OEMs that have invested in EV offerings are best placed to ride out the storm. 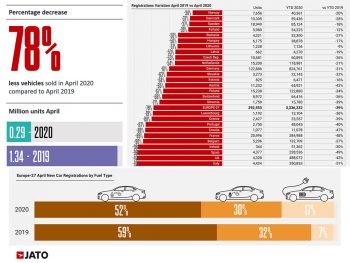 Felipe Munoz, global analyst at JATO Dynamics commented: “The only silver-lining from this turbulence is that it has created an opportunity for automotive players to reassess their operations and become more agile.” As quarantine was not enforced across all countries, registrations fell at different times and different levels. For instance, in Scandinavia, citizens were granted more freedom of movement, thus registrations fell by 37%, the lowest decrease. In contrast, four of the top five markets saw significant declines following strict lockdown restrictions. Combined registrations in Italy, the UK, Spain and France tumbled from 646,000 units in April 2019 to 34,000 one year later.

Munoz explained: “EVs were already driving part of the small growth that remained in 2019. This year, as governments have acted quickly to protect their people and economies, EVs have gained even more traction and visibility due to incentives.” Munoz continued: “These cars are likely to become the top choice for consumers seeking private transportation. OEMs who have invested heavily in EVs, are best placed to navigate the tough months ahead.”