Norway is leading the pack when it comes to the transition to electric vehicles with the highest concentration of plug-ins across Europe. However, a lack of demand in the used market is highlighting some of the challenges this ‘new’ sector faces. Peter Grøftehauge, CEO, Autorola Group, explains. 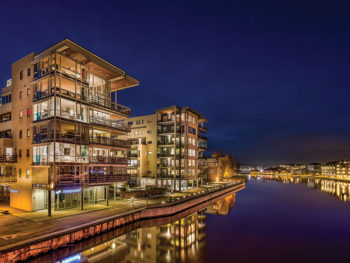 Norway has the most developed EV market in Europe, if not the world and, as such, is pioneering how market forces impact on the industry as a whole. With that, what we are finding is an increasing number of EVs entering the used market and the challenges arising around redistributing these units.

Pure electric cars and hybrids accounted for half of all new passenger car sales in Norway during 2018, compared to 40% in 2017, according to data from the independent Norwegian Road Federation (OFV). All indications are that this figure is set to increase again in 2019 with March‘s combined plug-in marketshare increasing to 69%.

While all this news is good for the electric vehicle movement, it is also beginning to highlight challenges within the used vehicle market as an increasing volume of vehicles come back into circulation. This is further implicated by the fact that the premium brands absorb two of the top three EV sales spots, upholding high residual values within the used sector.

With the global mega-trend of changing ownership models driving the vehicle leasing sector in Norway – as is similar throughout Europe – the used vehicle market for EVs is being impacted as a result. Although demand for EVs is very high across the board, it is proving challenging to resell used EVs when lease options on new vehicles look ­­so appealing.

At present, customers would rather take a vehicle on a lease agreement, safe in the knowledge that the vehicle is under warranty, and at the end of term they can hand it back without concern about its resale value. As a result, the used vehicle sector is finding it hard to gain traction.

It’s a difficult situation; although this means the leasing companies are moving a high volume of vehicles at the front end, they are also faced with the challenge of offloading those vehicles returned at end of lease. And, of course, with the market finely balanced between competitive rates on new and residual values within the used sector – it’s a dynamic that cannot simply be changed overnight.

Quite simply, at present, used EVs are priced too high for the market conditions. Rightly, dealers want a return on their investment, but a lack of demand locally is driving them to explore the potential for export. But even this avenue has its challenges at present due to the lack of true insight into EV markets. It’s a challenge we are looking closely at and working with our various partners to help resolve.

A key aspect of this oversupply in the used market is centred around ‘trust’ relating to the immature state of the market with uncertainty still surrounding long-term product reliability and challenges around infrastructure.

A consumer survey by Norsk Elbilforening also indicates that consumers have less confidence in Norway’s political ability to maintain a predictable EV-policy. Almost half (44%) are not confident that politicians will do what it takes to achieve the target that all personal cars sold in Norway in 2025 should be zero-emissions vehicles.

There is no quick fix to this. What the domestic market is willing to pay for a used EV does not currently align with the value vendors are placing on the vehicles. The result is a stagnated supply and demand curve which is seeing vendors sitting on the assets and seeking alternative means of disposal.

One area some vendors are exploring is the opportunity of exporting used EVs, however this is also bringing challenges as, at present, there are no obvious markets where demand necessitates imports within Europe or further afield.

Norway is in a very interesting position and is a real case study for the EV sector. Adoption of the technology has been world leading, in many ways thanks to the associated infrastructure and government incentives, but the rest of the market is finding it a challenge to keep pace.

We look at products such as used personal contract purchase (PCP) in the UK and beyond and know it is coming to the rest of Europe. In my opinion this is a solution that is needed and will certainly support the used EV sector.

Although economic growth slowed in 2018, the mainland economy, which excludes hydrocarbon extraction activity and related transport, grew at the fastest pace in four years due to robust private consumption. Private consumption was supported by a tighter labour market – with the unemployment rate falling to a four-year low – and high consumer confidence. In addition, the substantial increase in average oil prices in 2018 compared to 2017 strengthened both the country’s public finances and its external sector: the fiscal and current account surpluses both rose to four-year highs. Turning to 2019, consumer confidence remained in optimistic territory in the first quarter, although it dipped slightly, and monthly GDP data showed both the total economy and mainland economy expanded in January compared to December.

Greater investment in the hydrocarbon industry is set to boost the economy this year, while employment and lower corporate tax rates should support the mainland economy. On the other hand, tighter monetary policy, a slowdown in Europe and global trade tensions will likely weigh on prospects. FocusEconomics panellists see total GDP expanding 2.1% in 2019, which is unchanged from last month’s forecast, and 1.9% in 2020. In terms of mainland GDP, the experts see growth of 2.3% in 2019, which is also unchanged from last month’s projection and 1.9% in 2020.

According to monthly GDP data released by Statistics Norway, total economic output decreased 0.4% in February compared to the previous month in seasonally adjusted terms, contrasting January’s 0.2% increase. In the wider December–February period, the total economy expanded 0.2% from the previous rolling quarter, down from 0.4% in November–January.

Mainland GDP, which excludes hydrocarbon extraction activity and related transport, decreased 0.3% in February from the previous month, contrasting the 0.3% growth in January. This figure was also lower than market analysts’ expectations of a 0.1% drop. In the December–February period, mainland GDP rose 0.6% from the previous rolling quarter, down from 0.9% in November–January.

Consumer prices rose 0.2% in March compared to the previous month, down from the 0.8% increase in February. This latest increase was due to higher prices for clothing and footwear; however, lower prices for food and non-alcoholic beverages, and housing, water, electricity, gas and other fuels weighed on the overall price gains.

Inflation ticked down to 2.9% in March from 3.0% in February, although it remained above Norges Bank’s 2.0% target rate. Meanwhile, annual average inflation remained unchanged at 3.0%.

Core consumer prices, which are adjusted for tax changes and exclude energy prices, rose 0.3% in March compared to the previous month, down from 1.2% in February. Core inflation accelerated to 2.7% from 2.6%, which was above market analysts’ expectations of 2.5%.