Ford to cut 12,000 jobs in Europe under restructuring plans

Ford has announced that around 12,000 jobs are to go in Europe in line with restructuring plans intended to bring the carmaker back into profit. 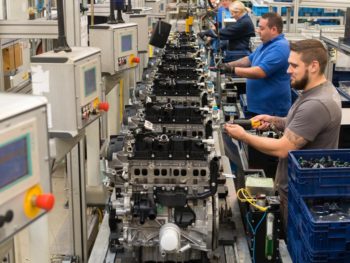 The proposed closure of the Bridgend engine plant risks 1,700 jobs according to the GMB union

The brand confirmed a month ago that it’s cutting about 7,000 salaried positions or about 10% of its global salaried workforce under a major restructure. It’s previously said that it’s cutting in excess of 5,000 jobs in Germany, with the total for the UK still to be confirmed.

In a statement today (27 June), Ford said that 12,000 jobs are to go at its wholly owned facilities and consolidated joint ventures in Europe by the end of 2020, primarily through voluntary separation programmes. Around 2,000 of those are salaried positions, which are included among the 7,000 salaried positions Ford is reducing globally.

“Separating employees and closing plants are the hardest decisions we make, and in recognition of the effect on families and communities, we are providing support to ease the impact,” said Stuart Rowley, president, Ford of Europe. “We are grateful for the ongoing consultations with our works councils, trade union partners and elected representatives. Together, we are moving forward and focused on building a long-term sustainable future for our business in Europe.”

The passenger vehicles group, under general manager Roelant de Waard based in Cologne, Germany, will lead a future portfolio of European-built cars and SUVs. This will see Ford expand in some car segments, including EVs and SUVs, and exiting others, such as MPVs. It’s now said at least three new nameplates will launch in the next five years  in addition to the new Kuga, Puma and Explorer Plug-In Hybrid due by early 2020.

The brand has also previously outlined plans for commercial vehicles to “grow leadership through [a] tightly integrated offering of smart vehicles, services and partnerships” and to leverage relationships, including a potential alliance with Volkswagen AG already announced last summer, to support commercial vehicle growth. The Commercial Vehicles group will be led by general manager Hans Schep and based at the company’s CV centre of excellence in Dunton, UK, which is being strengthened through facility improvements and investments to enhance technical skills.

Its plans for imported vehicles will cover a “niche portfolio of imported iconic nameplates for Europe” that will include Mustang, Edge, and another SUV to be revealed in April, along with an all-new Mustang-inspired full-electric performance utility in 2020. Ford expects to more than triple passenger vehicle imports into Europe annually by 2024.

And every new Ford passenger vehicle nameplate will include an electrified option while a future family of battery electric vehicles will be assembled in Europe.

Manufacturing efficiency is also being streamlined through the previously announced proposed or confirmed closure or sale of six assembly and component manufacturing plants by the end of next year, including the Bridgend engine plant in South Wales and its transmission plant in France. Its manufacturing base in Europe will be reduced to a proposed 18 facilities by the end of 2020, from 24 at the beginning of 2019. In the UK, the Ford of Britain and Ford Credit Europe headquarters in Warley also will close later this year and operations consolidated in Dunton.

Ford has also now said it’s implementing shift reductions at its assembly plants in Saarlouis, Germany, and Valencia, Spain, as well as a more streamlined management structure and marketing and sales operations.

The company also said it’s on track to significantly improve its financial results in Europe this year, paving the way to sustainable profitability and its longer-term goal of delivering a 6% EBIT margin.

“Ford will be a more targeted business in Europe, consistent with the company’s global redesign, generating higher returns through our focus on customer needs and a lean structure,” said Rowley.“Implementing our new strategy quickly enables us to invest and grow our leading commercial vehicle business and provide customers with more electrified vehicles, SUVs, exciting performance derivatives and iconic imported models.”