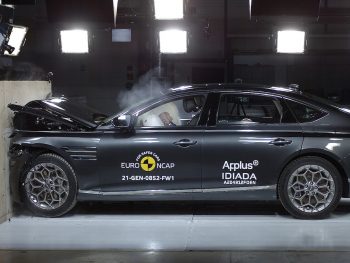 Hyundai’s premium offshoot brand announced earlier this month that it is launching in Europe this summer and has since revealed pricing for its first two models, the GV80 mid-size luxury SUV and the G80 executive saloon.

The cars both scored an impressive 91% for Adult Occupancy, protecting the dummies’ heads and bodies well in impact testing. In Safety Assist, the G80 slightly exceeded the GV80, with scores of 91% and 88% respectively.

Matthew Avery, director of research at Thatcham Research and Euro NCAP board member, said the Genesis models had “aced” the tests.

“Particularly in terms of protection offered in the event of a lateral impact. These are two of the strongest performers to have been tested since new impact test protocols were introduced in 2020,” he commented.

In addition, both cars are fitted with a centre airbag which helps to further protect passengers against occupant-to-occupant injuries in side impacts. Here, the GV80 scored maximum points – the highest achieved this year.

But they did score top marks for Child Occupant safety, and Avery said that both models could be an “excellent choice for families”.

The latest Euro NCAP tests also saw Citroën’s latest C4 tested, including the electric ë-C4 variant. The C4 scored four stars, due to a low score for its Autonomous Emergency Braking systems. There was also no centre airbag to protect the rear seat passengers.

The BMW 4 Series Coupé and 4 Series Convertible share the 2019 five-star rating of the BMW 3 Series on which they are largely based.

Michiel van Ratingen, secretary general of Euro NCAP, said: “These remain difficult times for the car industry, with the pandemic and semiconductor shortage presenting big challenges. Still, Genesis has managed to bring two cars to the market which offer excellent, all-round robust safety performance. Citroën chalked up a respectable four-star rating for the new C4 models, but still left us with the impression that with some more careful engineering it could have been much better.”