By Alex Grant / 3 years ago / Interviews / No Comments

Citroën CEO, Linda Jackson, has plans to increase the brand’s sales 30% to 1.6 million units by 2020, through a combination of products and customer service. Alex Grant finds out more. 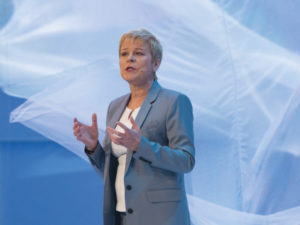 It’s three years since the PSA Group outlined plans to define its three brands more clearly; how is Citroën’s renewal shaping up?

Citroën is asserting its identity as a popular brand in the best sense of the word; a carmaker of and for the people. We’ve implemented this positioning over the last three years with a 360-degree strategy that makes the customer experience central, from new products, to changing sales outlets, to connected and mobility services.

For the first half of this year we’ve recorded the highest number of registrations in six years; a 5.6% increase [to 426,000 units] over the same period last year. Sales due in great part to the C3; 200,000 sales in one year after its launch, with 50% higher end and 60% two-tone. Also, the latest generation C4 Picasso continues to see success, now reaching 500,000 cumulative sales.

With a mid-life refresh of the C4 Cactus positioning it as a replacement for the soon-to-be-discontinued C4 hatchback, which other segments do you see as important?

Within the Citroën range we will have eight core silhouettes, which covers small, medium and large cars, including SUVs. At the same time, we have a core model strategy for commercial vehicles and we have a co-operation which will continue with Toyota on C1. So, when we talk about models we have three parts.

We are currently in the SUV phase, with C3 Aircross and C5 Aircross, which comes to Europe in the back end of next year, then we go through to 2020 launching another vehicle, and the range will be complete by 2021/22. As you move into 2020/21 you’re coming into a new era of platforms.

Last year you hinted that a sedan would be part of that line-up – what can we expect from that?

The easiest way to imagine what we’ve got in mind is by going back to the Paris Motor Show last year, and the Cxperience concept. It was a test. We wanted to create a large sedan that had none of the sedan markers; little wood, no leather, no chrome.

When we come to market, it will be a sedan of sorts but it won’t be a traditional, C5-type sedan. The Chinese market needs a three-box sedan, so we need to understand how we can be innovative in delivering that. To come to market with a traditional sedan and go against the Germans would be silly. You’ve got to come in with something that’s different for customers.

The marketing message for the C4 Cactus has changed since it first launched, now focusing on comfort and refinement instead of low running costs. Is this a sign of Citroën repositioning itself now that Opel and Vauxhall are part of the PSA Group?

Not at all. Citroën is in the heart of the mainstream, there are lots of people around there, but we are not moving. Opel will create its own positioning, it is currently doing its own plan, but it won’t affect Citroën. We will remain in the heart of the mainstream and concentrate on two distinct things; one about design – we will be different in the market as that’s where we need to be – and comfort is a major factor. Opel will produce its plan and positioning, but that won’t affect Citroën, or any of the brands [in the PSA Group]. 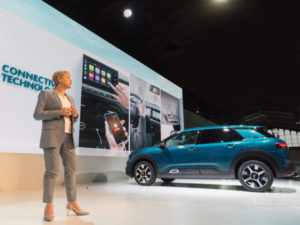 The products we’re producing now are relevant for the mainstream, at the prices we’re trying to do. Therefore I don’t see any point moving upstream as we’ll go back to the same problem, which is why we started this in 2014, of competing for the same customers. We looked at whether Opel customers hesitate with a Citroën and vice versa, are they are a completely different customer base. We don’t believe there’s any issue or cannibalisation within the brands, but each must have a very strong positioning in terms of their key assets.

With the prevalence of leasing and finance, residual values often play a bigger role in whole-life costs than the actual price of the car – how are you looking to strengthen these?

It started four or five years ago in terms of building quality into the car, and benchmarking against the German brands. So it’s in the conception of the vehicle; it’s fit, finish, parts used. It’s much easier to improve residual values of a new car. Then it’s a matter of coming to market.

When I first joined in 2005, we were the cashback kings of the market. You don’t build any value in a car by doing that. It’s a strategy of building volume, but it’s a short-term strategy because the residual value is no good. From 2010 onwards, we Introduced finance offers to move away from cashbacks. That way everybody that’s doing the quoting sees the value of your car, and that you’re not distressing the car. So it’s quality build, quality conception, and how you come to market. It takes years to do it.

Given the popularity of sports-styled trims in other model ranges, do you see a role for similar offers within the Citroën line-up?

We need something. Whether it’s sporty, which Peugeot does well, we’re looking at what we can do. But it needs to fit in with the positioning of Citroën, which isn’t about sportiness – it’s about comfort.

PSA chairman, Carlos Tavares, said last year that the group will have 11 plug-in vehicles by 2021. When will Citroën introduce its first electrified models?

From 2023, 80% of our vehicles will be electrified or plug-in hybrid. New vehicles that we launch after 2020 will be on multi-engine platforms, so will have electric or plug-in hybrid [technology], depending on the market. We’re working with Dongfeng, on a platform called e-CMP (electric Common Module Platform), which is originally a PSA platform shared with Dongfeng. Citroën will work off that as well.