By Katie Beck / 3 years ago / Interviews / No Comments

New Discovery will add to a growing line of Jaguar Land Rover models with strong fleet appeal across Europe, as John Kendall finds out. 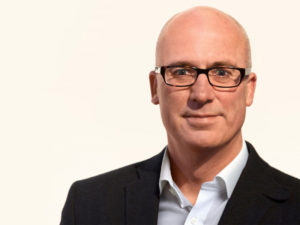 Jaguar Land Rover has not waited for the UK to leave the EU – the company’s definition of Europe already excludes the UK, but includes a total of 43 countries, including Norway, Finland and across to Israel, Turkey, Iceland and Portugal.

“That’s where our core fleet volume sits and also our core fleet competence,” says Dransfield, “I was brought in five or six years ago to start the fleet business, not from a standing start, but our product portfolio wasn’t really aligned to the fleet segment. Over that period of time, we are now in the position that fleet has become the leading contribution in terms of sales channels across Europe.

That has been partly through investment at market and dealer level, but predominantly having the products that are appropriate for the market. So whether that is a lowering of CO2 emissions, or the all aluminium architecture that reduces the weight of our vehicles, our performance has pretty much been positioned on the back of the product development. So now around 40-46% of sales are coming from fleet.” That figure applies to Jaguar and Land Rover sales across the company’s defined Europe region.

This proportion includes markets that are new and emerging for JLR, such as Poland, Switzerland, Norway and Finland, while in other markets such as Belgium and the Netherlands, over 50% of sales are already through fleet. “It’s quite an exciting journey that we have been on,” says Dransfield, “At the same time we have brought together the Jaguar and Land Rover networks. The financial viability of your brand and proposition has to have some traction in the market and through bringing the two together it has allowed us to work with the right dealers on a long term basis.

“In some ways we work in tandem with the UK. The market dynamics are obviously different, but in terms of the general principles of good business, we are very much aligned. We have the fleet business centre programme, so in 67 key metro areas across Europe we have dedicated people and dealerships that have the fleet knowledge and capability and knowledge to position our products in the market, not just with big accounts. Our heartland is really the small to medium enterprise.

“In the five to 99 sized fleet is where we really have the traction through the network and also with our leasing partners. So we have a strategy where we work with our leasing companies to leverage their reach, because clearly, we are still, relatively, a small manufacturer in the fleet world. So we see them all as partners, rather than competitors, so we have a very strong relationship there.

“That has been the platform to get strong residuals, strong leasing rates and reduction in SMR costs to really make it price competitive. The challenge we have always had is background perception. The brand perception of Jaguar especially has been one of quite a luxurious choice. Our whole challenge has been about making it a viable luxury choice, so it is not seen to be an inappropriate choice. For us that in a way, is the last step that we have to get over, because I think we have got the pricing right, the RVs right and the leasing rates right, so the product is very strong on its own capabilities and now it’s about the brand acceptance and considerations. Is it on your shopping list, is it at the front of your mind if you are thinking about changing your car?”

The JLR fleet team is based in Germany, which makes the company only too aware of the dominance of the competition from Audi, BMW and Mercedes-Benz. Dransfield believes that JLR still has a considerable distance to go despite having a very capable product range. “Now it’s about making it very relevant to the fleet audience,” comments Dransfield, “That five to 99 is where we see the real heartland. It’s why we get involved in rental. Our rental proposition is not about driving sales, it’s about driving considerations, our presence on the road. We have selected partners that we launch cars with in the rental sector. It’s very select and in controlled numbers. It’s about getting the cars on the road. We are very keen to promote that. If you think about the two factors that we never addressed with Jaguar, it was age – drivers below 50 and women.”

Dransfield thinks that the XE was the first Jaguar to break the dominance of men behind the wheel of a Jaguar, “Now we are in the position that the F-Pace is absolutely attractive to both male and female customers. I think we are really widening the attractiveness of the brand through the products and I think products do define brands in terms of how they finish up.”

Land Rover launched the new Discovery at the Paris Show and Dransfield sees this as another step forward with aluminium reducing the weight of the car and the introduction of the 4-cylinder diesel to the model line-up. Both have helped to reduce CO2 emissions, making the car more tax friendly in some of the major European fleet markets. He points out that the Discovery 4 was some 480kgs heavier than the new model.

“Amazingly, in my key six markets in Europe, Discovery grew 20% in this last year, in fleet,” says Dransfield, “So we have the bizarre situation that Evoque, at six years old, grew 18% year-on-year, last year (2015) to this year. So I have what would be considered ageing model lines, but our life-cycle curve does not peak and then decline, it tends to keep climbing, so what we are doing is replacing an already successful car with an even better proposition.

“Our expectations in terms of volume are not huge, but we don’t see any dip off the back of the Discovery model change. I think we are going to be pleasantly surprised, particularly in terms of some of the bigger markets. Italy is a fantastic market for us. We’re taking over 25% of the segment in Italy and on Jaguar as well. They take the cars on the basis of how they look.

“I’ve got the right people. It is still a people-led business. We have recruited real specialists, it’s about bringing in expertise from outside. They have brought with them that momentum to look at things in a different way and challenge the way we do things.”