Jaguar Land Rover has reported a £3.4bn (€3bn) loss for the last three months of 2018 after being hit by both declining sales in China and the downturn in diesel demand. 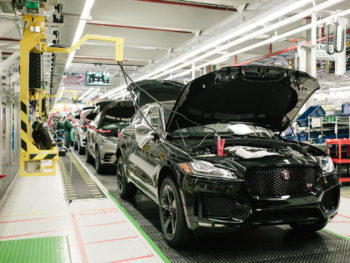 Speaking on the charge, the carmaker said: “The automotive industry is facing significant market, technological, and regulatory headwinds. At the same time, investment in new models, electrification and other technologies remains high. Given the muted demand scenario and the associated impact on the financials, Jaguar Land Rover has concluded that the carrying value of capitalised investments should be adjusted down.”

JLR chief executive Ralf Speth commented on the accounting adjustment, saying it was “consistent with the other decisive actions that we must take as part of our ‘Charge’ and ‘Accelerate’ transformation programmes to create an efficient and resilient business, enabling Jaguar Land Rover to counter the multiple economic, geopolitical, technological and regulatory headwinds presently impacting the automotive industry.”

He also said that the carmaker continues to work closely with Chinese retailers to respond to current market conditions with a ‘Pull’ based approach to vehicle sales.

“We are taking the right decisions to prepare the company for the new technologies and strong product offensive that will enable a long-term future of sustainable profitable growth,” he added.

Professional services consultancy Begbies Traynor commented on the announcement. Partner Julie Palmer said: “The automotive industry has been vocal on its thoughts about Brexit, and in particular, a no-deal Brexit. However, for JLR, it has also been hit by a diminishing Chinese market and the impact of governmental policy changes towards diesel.

“As such, the automotive manufacturer has experienced a sharp fall in sales amid job cuts of up to 4,500 – nearly 25% of its UK workforce. The firm also announced plans to temporarily shut down its UK plants in April, while the Land Rover Discovery production will be moved from the UK to Slovakia this month.

“However, it hasn’t only been JLR struggling under these conditions. According to our latest Red Flag Alert research, the number of automotive businesses in significant financial distress rose by 3% in Q4 2018 from the previous quarter. This is a trend we expect to continue while the threat of a no-deal Brexit is looming and other major markets remain in decline.

“The car maker will be keen that people focus on the positives, no matter how small. With record sales in the US for January and its £2.5bn cost-cutting programme now in full swing and sales of their electric cars are rising as it tries to flex to market changes. 2019 could well prove to be a defining year for the manufacturer and whether it can regain its status as one of Europe’s leading brands.”