Plans set out by the chancellor to get the UK economy back up and running have left the fleet and auto sectors disappointed for their lack of support. 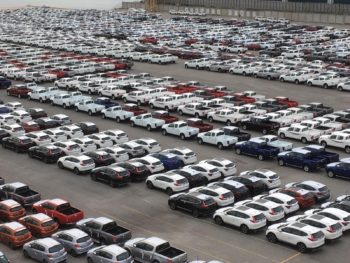 The SMMT has said that out off Europe’s five biggest economies, Britain now stands alone in failing to provide any dedicated support for its auto industry

The £30bn package announced in Rishi Sunak’s Summer Statement focused on job creation and included a range of measures, from development of new apprenticeships to a VAT cut for the hospitality and tourism industries and a restaurant voucher scheme.

But the stimulus package omitted any automotive sector-specific measures such as scrappage incentives, despite this week’s publication of new car registration figures showing the June market plummeted 35% year-on-year – and with fleet sales plunging 45%;  the figures for the month had been expected to provide the acid test of whether such a scheme was required.

And it’s left many in the fleet and automotive sectors crying out for more to be done.

Paul Hollick, chair at the Association of Fleet Professionals (AF), said it was disappointing that none of the support for vulnerable sectors had found its way into areas that are likely to benefit fleets.

“This especially applies to low-carbon transport initiatives but there could also have potentially been aid for dealers, manufacturers and even fleet service support companies, all of which are facing specific problems. Given the fast-moving economic and infection situation, we don’t think this is the last time we’ll see him making announcements of this type over the next few months and we remain hopeful that we will be included in future programmes, an argument we’ll be making as an organisation.”

Automotive analytics firm GlobalData has also warned that the UK’s auto industry will struggle without targeted government support. There had been reports that the Government was looking to offer up to £6,000 off the purchase price of a new vehicle, potentially targeting electric vehicle uptake by targeting older diesel and petrol vehicles, accelerating plans for sales of new petrol, diesel and even hybrid cars to be halted by 2035 or even earlier.

David Leggett, automotive analyst at GlobalData, said the Government had missed an opportunity to get such a scheme in place.

“The UK government faces a big challenge in getting the economy back up and running again and there are naturally competing claims for support measures from different sectors. However, the automotive industry is understandably concerned that the Government has not yet chosen to introduce sector-specific measures for the UK automotive sector.

“Financial or scrappage incentives designed to encourage consumers to trade in their old vehicles for more environmentally friendly new vehicles have been introduced in a host of European countries. In the UK, too, they would lift retail activity, help get the industry back to work and provide a much-needed boost for the UK economy.

“They could also be framed to encourage the sale of greener cars, helping UK companies active in emerging advanced technologies such as electrification.”

He added that the company forecasts that the UK light vehicle (including light commercial vehicles as well as passenger cars) market for 2020 will be down by 33.2% at 1.85 million units – and that forecast is predicated on some form of incentive being introduced in the second half of the year.

“The automotive industry in Britain – which also faces the headache of the possible imposition of new trade tariffs on EU business next year – will struggle without targeted support. The automotive sector has been particularly hard hit in this crisis, with thousands of job losses already announced and many more at risk.”

His comments have been echoed by Mike Hawes, chief executive of the Society of Motor Manufacturers and Traders, who said it was bitterly disappointing the chancellor had stopped short of supporting the restart of one of the UK’s most important employers and a driver of growth.

“Of Europe’s five biggest economies, Britain now stands alone in failing to provide any dedicated support for its automotive industry, a situation that will only deter future investment,” he stated.

“We urgently need government to expand its strategy and introduce sector-specific measures for UK auto to support cash flow such as business rate holidays, tax cuts, and policies that provide broader support for consumer confidence and boost the big ticket spending that drives manufacturing. Until critical industries such as automotive recover, the UK economic recovery will be stuck in low gear.”

Meanwhile, Steve Nash, CEO of the Institute of the Motor Industry (IMI) welcomed the chancellor’s ‘Plan for Jobs’ but called for a cut in VAT on car sales to match the Government’s move to stimulate spending in the hospitality and tourism sectors.

“A VAT cut on car sales would have made a big difference in encouraging consumers to get back into the showrooms – virtual or physical – and that would have in turn helped with the Government’s ‘road to zero’ objectives.”

Research by Carwow has reinforced that a VAT cut on car sales would be greeted by buyers; 34% of respondents to a survey by the new and used car comparison site said such a reduction would encourage them to buy a car right now.

Meanwhile, respondents to Carwow’s survey also said 0% finance (60%) and manufacture deals (43%) would cement their intention to buy a new car.

However, as with many in the industry, Carwow also believes that a meaningful scrappage scheme offers better long-term benefits for the new car market.

CEO James Hind added: “Learning from the pragmatic and forward-thinking schemes that have been so successful in Spain and Germany, we have the opportunity to bring about a real gear shift in car buying behaviour in the UK.”