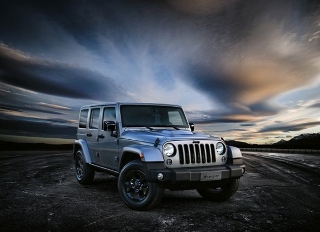 The brand’s appearance at the show comes on the back of 2014 sales that saw it placed as the fastest growing brand within Europe. In particular, last year in the area of Europe, Middle East and Africa (EMEA), there were an unprecedented number of Jeep registrations, with an increase of more than 42% in the EMEA area and 70% in Europe alone (EU 28 + EFTA) with record results in many of the main countries, and in particular France with a 110% increase, Italy with a 95% increase, followed by Belgium with 87%, UK with 75% and Germany with 50%.

At the show, Jeep will showcase the latest arrival in the family, the new Renegade, which is marked out as the first FCA vehicle to take its place in the small SUV segment and the first Jeep vehicle to be manufactured in Italy and sold in over 100 countries worldwide, including the United States.

Geneva will see the debut of the first petrol-fuelled engine, the 1.4, 170PS Multiair 2 combined with nine-speed automatic transmission and full four-wheel drive "Jeep Active Drive". This will be available in the Limited version from March onwards.

Available from June onwards on the Renegade models – the first Jeep vehicle on which they are supplied – both versions provide a Bluetooth interface, Aux-in connector, USB port and vocal commands. Plus, the Uconnect 5-inch Radio Nav LIVE device offers a TomTom 2.5D navigations system, while the Uconnect 6.5-inch Radio Nav LIVE is equipped with a satellite navigation with 3D maps and the "One Shot Voice Destination Entry" function to allow the address to be entered using vocal commands.

Also the flagship Grand Cherokee will be present with three versions: the top-of-the-range Summit equipped with the new Platinum Pack, the high-performance version SRT – with a top speed of 257kph reaching 0 to 100kph in 4 seconds – with Active Noise Cancellation (ANC) technology and the Overland 3.0 Multijet V6 version with 250PSP combined with an automatic eight-gear transmission and all-wheel drive Quadra Drive II.

Previous: Prologue Avant concept previews next generation of Audi estates
Next: Fleetmatics expands into France with acquisition of Ornicar