By Natalie Middleton / 5 days ago / News / No Comments

Mercedes-Benz has revealed its new-generation C-Class saloon and estate, introducing an electrified-only engine line-up including plug-in hybrids, plus increased luxury and latest technology. 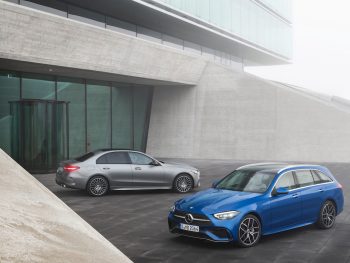 Due on sale from 30 March 2021, the sixth-gen model incorporates styling elements from its A-Class, E-Class and CLA stablemates, while also bringing increased space, including more room for rear passengers. Luggage capacity stands at 455 litres for the saloon – the same as before – while the estate ranges from 490 to 1,510 litres; up by 30 litres for both minimum and maximum space.

Engines come with a nine-speed automatic as standard and the C 200 and C 300 have the option of Mercedes’ 4Matic four-wheel drive.

The plug-in hybrid petrol and diesel models will arrive shortly after launch and use a 129hp motor and a 25.4kWh battery, giving around a 100km (62-mile) range.

The interior adopts highlights from the new S-Class, incorporating sporty elements, such as the driver-focused dashboard and central display.

As with the new S-Class, the latest C-Class is equipped with the second generation of the MBUX (Mercedes-Benz User Experience) infotainment system and includes a more interactive version of the ‘Hey Mercedes’ voice assistant, which is capable of learning by activating online services in the Mercedes Me app and can even by used to control domestic equipment and household appliances. It can also be updated over the air.

Equipment options include a colour-head up display and an Augmented Video system, which uses a camera to pick up on local images such as traffic signs and superimpose them on a video in the central display to make navigating easier.

The C-Class Saloon and Estate models will arrive in dealer showrooms in summer 2021.