Opel’s Grandland SUV has been given a major overhaul, equipping it with a bold new design and an array of extra technology. 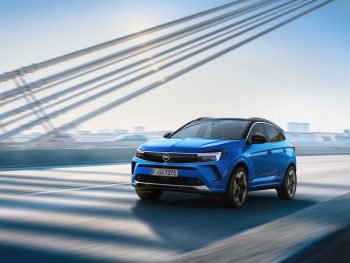 The heavily revised Opel Grandland starts deliveries in the autumn

Starting deliveries in the autumn, the brand’s flagship SUV is now simply known as Grandland and loses the ‘X’ suffix, already dropped for the Crossland and Mokka.

It also gets styling cues seen on the Mokka, such as the ‘Vizor’ front-end. This integrates the grille, badge and the Grandland’s new IntelliLux LED Pixel light technology.

The latter is carried over from the Insignia and uses 168 LED elements to adapt the light beam according to the driving conditions and surroundings, without dazzling oncoming traffic. The Grandland also debuts Opel’s Night Vision tech system, which detects pedestrians and animals in darkness at a distance of up to 100m and alerts the driver.

It’s not just the exterior that’s been significantly revised; the interior now features Opel’s Pure Panel cockpit already seen in Mokka and also making its way to the new Astra. This merges two wide screens into a single unit – feature a touchscreen of up to 10 inches facing the driver and with essential driving info, plus a 12-inch central infotainment screen. The infotainment system is Apple CarPlay and Android Auto-compatible and provides a range of services through OpelConnect. Wireless phone charging is also provided.

Other onboard tech making its debut includes Opel’s semi-adaptive Highway Integration Assist for models with an automatic transmission. It functions as adaptive cruise control, including for stop-and-start traffic, and will also keep the Grandland central in its lane.

Practical features bring keyless open & start and a sensor-controlled tailgate that can be kick-operated, while Opel has also placed a focus on top levels of comfort; the ergonomic active seats for drivers and front passengers have been certified by the AGR –Germany’s ‘Campaign for Healthier Backs’ association – and help support good posture.

Engine line-up has not been revealed but Opel has said it will again include diesel and petrol options while the Grandland will also be available again as a plug-in hybrid.

Full pricing and specification details will be announced prior to sales starting later this year.