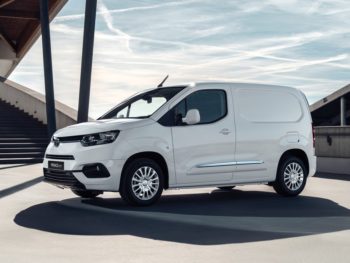 With the launch early next year of the Proace City compact van, Toyota has big plans for the light commercial vehicle market, with annual sales in Europe set to exceed 100,000 vehicles by 2020. At present, the company is only competing in the medium van and pickup segments, with Proace and Hilux respectively. However, these two areas account for just 37% of the overall European LCV market, limiting Toyota’s potential impact.

The compact or car-derived van sector that Proace City competes in, is the biggest single sector in Europe. Combined with Proace and Hilux, Proace City will open the door to 75% of the LCV market, providing Toyota with an opportunity to rapidly expand its presence in the van arena. It’s an opportunity that the company intends to grab with both hands. With electric versions of both Proace and Proace City also coming to market over the next two years, the company is looking to boost sales across the board.

To help achieve this, Toyota is developing a dedicated LCV brand, called Toyota Professional. Currently, around 30% of the company’s European dealers are Business Centres, concentrating on fleet and LCV sales. Toyota Professional outlets will have to meet a new level of standards, on top of the Business Centre approach. They will also need to sell at least 80 LCVs per year, or more than 100 in the UK where the concept has already been proven and sales are higher. Indeed, much of the LCV Centre philosophy has already been proven by the UK network, which along with dealers in the Netherlands and in Poland, have in effect already established LCV centres in all but Toyota Professional name.

LCV centres will have to have at least one dedicated sales person, a full display of Toyota LCVs including conversions, Toyota Professional branding and Toyota Plus used vehicles. The centres will need to provide express servicing or flexible service hours, courtesy vans and LCV dedicated working areas and vehicle lifts.

Toyota will launch the Proace Electric in 2020, initially in the Netherlands and in Norway, where electric vehicles now make up 50% of overall vehicle sales. France and Spain will follow, with the UK in a group of countries including Germany, Sweden and Italy that are moving at a slower pace towards electromobility.

Both the Proace Electric and the Proace City Electric will be full EVs, supplied by Toyota’s LCV partner PSA. At present there are no details on power or range, though the company insists that there are no packaging constraints to reduce load volume. Payload will drop by around 200kg on the Proace Electric, to 1.0 and 1.2 tonnes, depending on model. The electric vans will be offered for purchase or on a full-service lease.

Having established Proace as a player in the mid-weight van sector, Toyota Europe is launching a Black Edition of both the van and the Verso people carrier. However, the UK won’t be taking this van, as it has already indicated that it will launch a Proace Design model, first seen at the CV Show, by the end of this year. This range-topping Proace will come with alloys, a 7” ProTouch navigation system, Toyota Safety Sense and front and rear parking sensors.