By John Kendall / 3 weeks ago / News / No Comments

Renault has announced further details about the new Kangoo van, due for launch early in 2022 and bringing 50 litres of storage in the cab and 12 driver assistance systems 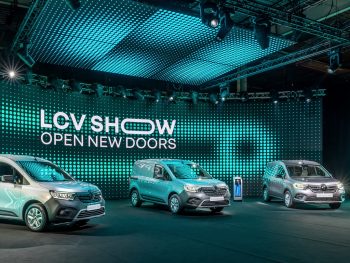 There will be standard and long versions of new Kangoo, and electric versions, to be called Kangoo Van E-Tech Electric, will be available, replacing the Kangoo Z.E.

Electric versions, to be called Kangoo Van E-Tech Electric, will be available, replacing the Kangoo Z.E. These will be powered by a 102hp electric motor with 245Nm of torque. Renault says there will be six driving modes, including Eco, which reduces motor power to 55kW. A 44kWh lithium-ion battery will provide a claimed range of up to 165 miles. Recharging will take seven hours from a wallbox charger, 26 hours from a domestic socket or 42 minutes for an 80% charge from a 75kW rapid charger.

The 50 litres of cabin storage are provided by a 19.4-litre overhead tray, five litres of central dash storage, door compartments with cup holders and a 1.5-litre driver’s side compartment. Renault has improved the sound insulation in the cab with reinforced sound proofing in the dashboard and door panels, an engine housing designed to reduce noise, as well as thicker windows and more foam padding.

Equipment includes a smart phone dock, which can be positioned either side of the steering wheel to suit the driver. The dock also includes wireless charging. Renault offers up to 12 driver assistance systems including front, rear and side parking assistant, hands-free parking and Kangoo comes with Permanent Rear View Assist – a camera system in place of the rear-view mirror. Other systems include Active Blind Spot Monitoring, Active Emergency Braking and Trailer Swing Assist. An Extended Grip option includes all-season tyres to improve traction.

Apart from the electric variants, Kangoo will also be available with a range of petrol and diesel engines. These include 1.3TCE 130hp and 100hp petrol engines. Three diesel power options are available – 75hp, 95hp and 115hp 1.5dCi engines. Manual and automatic transmissions are available – seven speed EDC dual clutch automatic transmission is offered with 130hp petrol, 115hp and 95hp diesels. All engines are available with six-speed manual transmission. WLTP combined cycle consumption is quoted as 54.3mpg for diesels and 44.1mpg for petrol engines. Renault offers the 130hp petrol and 95hp diesel with a 68mph speed limiter which reduces combined fuel consumption to 57.7mpg for diesel and 46.3mpg for petrol-powered variants.

Prices will be available closer to launch.

Renault has also announced plans to launch a hydrogen fuel-cell powered variant of the Master van and will launch another small van in left-hand-drive markets called the Renault Express.

John joined Commercial Motor magazine in 1990 and has since been editor of many titles, including Van Fleet World and International Fleet World, before spending three years in public relations. He returned to the Van Fleet World editor’s chair in autumn 2020.