By Martyn Collins / 11 months ago / Road Tests / No Comments

Audi’s big coupé goes plug-in hybrid, and it could be the pick of the A7 range, Martyn Collins reckons. 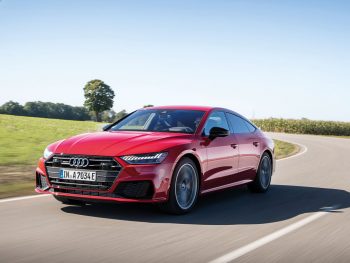 The first model in Audi’s hybrid arsenal was the recently launched 55 TFSI e version of its mid-size SUV – the Q5.

The next Audi to get dual power is the svelte A7. Largely following the same formula as the Q5, the A7 55 TFSI e is powered by a 2.0-litre TFSI petrol engine, mated with a 114hp electric motor. The result is an impressive 362hp, with 0-100km/h acceleration in just 5.7 seconds and a top speed of 250km/h. Yet, despite all this performance, the TFSI e with its 14.1kWh battery is still capable of over 40km on bettery power alone.

You know you’re in a plug-in hybrid Audi when you set off. Instead of the muted 2.0-litre petrol tones, this A7 starts almost silently.

At higher motorway speeds the Audi then slickly and smoothly switches to petrol power, with the battery providing extra poke when needed via Audi’s electric drive meter. Vibrations from the throttle pedal tell you when to ease off.

The Verdict
Low consumption and C02 figures are sure to be an attraction, but on first impression this Audi has a fine plug-in hybrid drivetrain that’s sure to equal everyday savings for business buyers.