By Martyn Collins / 1 year ago / Road Tests / No Comments 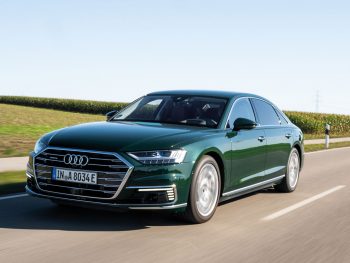 With rivals from BMW and Mercedes-Benz able to offer plug-in hybrid versions of both the 7 Series and S-Class, and Audi’s current emphasis on hybrid models, it is no surprise that the latest addition to the range-topping A8 is a plug-in hybrid.

The hybrid drivetrain is largely the same as the Q5 and A7 that Fleet World has already driven, although this time, rather than a 2.0-litre TFSI petrol, there’s a 315hp 3.0-litre turbocharged V6 petrol combined with a 128hp electric motor that’s powered by a 14.1kWh battery pack. Both of these equal a scarcely believable 450hp, plus acceleration to 100km/h takes just 4.9 seconds and yet this A8 can travel up to 47km on electric power alone.

Outside, like the other Audi hybrids, just the subtle TFSI e badges give the game away. On the inside, the only differences from standard are the electrical range and consumption gauges.

Starting off in complete silence is an odd experience in such a big car and despite the extra weight of the A8, performance is impressively swift. The level of comfort remains unchanged, despite the extra weight. In fact, the hybrid version could be the most refined version of the biggest Audi saloon – thanks to the silent runningof the electric motor.

Only on the motorway does the A8 smoothly change power, the giveaway being the rev counter. Then, the electric motor provides extra poke when needed via Audi’s electric drive meter. Hearing the audible whirring noise, is often the only way of telling you’re using electric power.

The Verdict
Exceptional consumption and CO2 figures, will equal big enough savings to make the Audi A8 60 TFSI the pick of the range for business buyers.

Previous: Volvo suspends European and US production but sees return to norm in China
Next: Road test: Toyota C-HR