The Scout is a fantastic all-rounder, but with a looming threat, explains Alex Grant. 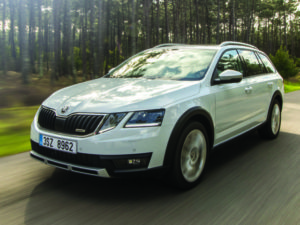 High on value and packed full of flexibility, Skoda’s Octavia is far from short of talents. But, as if that list isn’t quite long enough, the Scout lets it take your business off-road too.

The popularity of crossovers means the line between wagons and SUVs are increasingly blurred, but this falls closer to the latter than you might expect. There’s no front-wheel drive version, unlike Skoda’s forthcoming Karoq crossover, while the additional body cladding is paired with reduced overhangs and a ‘Rough Road’ package shielding vulnerable components underneath.

Most of the upgrades are hidden. The Scout gets 30mm extra ground clearance and the same multi-link rear axle usually only used on the sporty vRS, now with a slightly wider track to aid stability. A specific off-road driving mode means it can tailor on-board systems to suit loose surfaces, while the XDS+ electronic differential is the same technology found in the Golf R, shifting power to the wheels with the most grip. It might look like a wagon, but some small crossovers can’t go as far off road as this can.

Most markets will get a choice of three engines; a pair of 2.0-litre TDIs with 150hp or 184hp, and a 1.8-litre TSI with 180hp. All diesel versions consume 4.7l/100km or less at highway speeds, and the Scout gets a 55-litre fuel tank (compared to 50-litres for two-wheel drive models) which means those with only occasional off-road needs won’t find themselves filling up all the time.

As appealing as it might be with its most powerful engines – the high-powered diesel is shared with the vRS – the 150hp TDI is the most versatile option. It’s the only one available with a manual transmission as well as the DSG automatic, and offers both the lowest fuel consumption and highest towing capability of the line-up. With a wide spread of pulling power, barely any engine noise and fuel consumption of around 5.6l/100km while cruising, anything more seems unnecessary.

In addition to styling upgrades, the 2017 facelift adds an 8.0-inch touchscreen navigation system, and unique half-leather, half-alcantara upholstery is optional. The Scout’s long wheelbase and sophisticated rear axle mean ride quality is very high, even on relatively large wheels, and there’s no noticeable increase in body roll with the raised ride height. Cabin space is in line with the segment above.

As is its ability to move large objects. The Scout still offers a metre-square load area in the boot, with a wide tailgate and 610-litre capacity beneath the load cover, unaffected by packaging four-wheel drive components underneath. Those who need to tow can also add Trailer Assist as an option, which offers more intuitive control of steering manoeuvres via the mirror adjuster knob.

The Scout has an impressive set of talents but it faces the same problem as most other Combis, that it’s not quite where the demand lies. With the Qashqai-sized Karoq crossover on the way, its biggest threat may come from just across the showroom.

What we think
The Scout offers useful off-road ability without compromising on the Octavia’s best points. But SUV styling will probably give the Karoq broader appeal.