The Swiss passenger car market continued to struggle with the difficult market conditions at the beginning of the second half of the year despite lockdown easing. 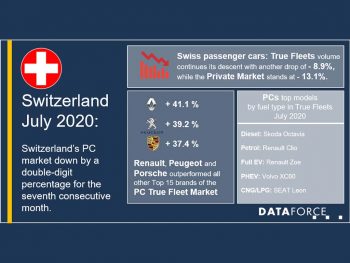 Renault, Peugeot and Porsche each did well in the difficult Swiss true fleet market

In July, just under 22,300 new passenger cars were registered, which represented a decline of 11.7% compared with the same month last year. This was the seventh consecutive month in which the passenger car market was down by a double-digit percentage, Dataforce said.

Private market registrations in July were 13.1% below those from the previous year, while commercial registrations fell slightly less sharply and were down by 10.2%. Although developments at the overall market level (-11.7%) were equivalent to the seventh double-digit decline for the year, the percentage loss was at a level comparable to pre-coronavirus crisis.

Within the commercial sub-channels, company registrations in the true fleet market fell by 8.9% year-on-year but were significantly more stable than in previous months. At cantonal level, there were both increases and decreases. Within the 10 cantons with the highest registration volume, the cantons of Geneva (24.1%), Lucerne (12.7%) and Berne (6.2%), among others, recorded increases in July. In others however, like St. Gallen (-23.2%), Zurich (-17.0%) and Vaud (-15.9%) company registrations declined.

While registrations for dealers/importers fell by 29.0%, registrations of car rental companies grew by 22.1%, which coincided with the main holiday season across Europe.

Skoda was represented here with the Swiss fleet model no. 1, the Octavia, as well as with the Kodiaq and Karoq. At BMW, the X1, 2 Series Gran Tourer and the 3 Series were popular.