Carlos Tavares has confirmed that the Groupe PSA and FCA Group is advancing well, despite the EU’s anti-trust probe. 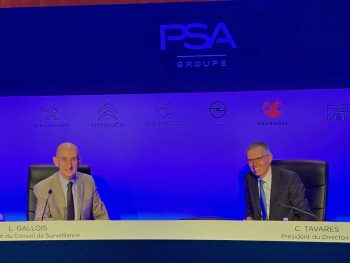 Tavares, chief executive officer and chairman of the Managing Board of Groupe PSA, said during the companies AGM held yesterday, 25 June, that preparations for the 50/50 merger announced in December 2019 are advancing well, including with respect to antitrust and other regulatory filings.

Furthermore, the completion of the proposed merger is still anticipated to complete before the end of Q1 2021, subject to customary closing conditions.

The merger is set to make the companies the third largest auto maker behind Toyota and Volkswagen Group.

The companies also believe that 80% of synergies will be reached by year 4, including the convergence of vehicle platforms, consolidation of investments in ICE and electric powertrains, and manufacturing. The merger is also expected to cost in the region of €2.8bn, although it is believed the net cash flow will be positive from year 1.

Previous: Volvo Car Group partners with Waymo
Next: Comment: Why fleets have a critical part to play in the UK’s green recovery