Toyota and Suzuki are exploring the possibility of a business partnership covering areas including environmental, safety and information technologies and procurement. 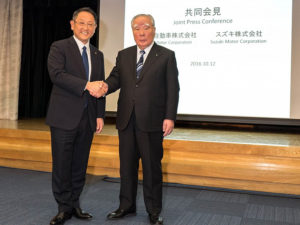 The agreement follows on from the carmakers’ announcement last October that they would explore a business partnership and comes at a time of increasing collaboration in the global car industry, including last week’s agreement between GM and Honda on mass production of hydrogen fuel cell cars.

A statement from Toyota and Suzuki in October said “in the face of the advanced and future R&D field, Suzuki is increasingly feeling a sense of uncertainty” and added that Toyota was “conscious of the fact that it may be behind competitors in North America and Europe when it comes to the establishment of standardisations, and partnership with other companies”.

The statement also recognised the importance for carmakers of working together with other companies on areas such as infrastructure development, as well as the establishment of new industrial standards, and said that Toyota and Suzuki would be open to other companies in the collaboration.

Speaking at the time, Akio Toyoda, president of Toyota, said: “As the environment which surrounds the automobile industry has been changing drastically, we need to have the ability to respond to changes in order to survive.”

Suzuki had previously entered a partnership with Volkswagen but this ended a year ago with Suzuki buying back a 19.9% stake after a near four-year dispute with the German carmaker after both parties accused each other of failing their contractual obligations.

Work will now begin on setting up an implementation framework for the new Toyota–Suzuki deal.

Osamu Suzuki, Suzuki chairman, said: “We now stand at the starting point for building a concrete, co-operative relationship, I want to give this effort our fullest and to aim at producing results that will lead Toyota to conclude that deciding to work together with Suzuki was the right thing for them to have decided to do.”