By Jonathan Musk / 5 months ago / News / No Comments

Latest figures from Dataforce show the German car market proved particularly healthy in July 2019, with almost 333,000 new passenger cars registered – a high not seen in any other July since 2009 when a scrappage scheme boosted figures. 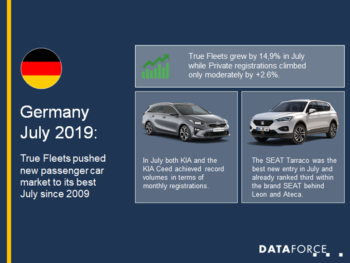 German true fleet showed surprising results, with a new high since 2009, as well as increased market shares for electric cars

Compared to the same month last year, new registrations increased by 4.7% overall. Dataforce commented that although this doesn’t sound remarkable, it is because of last year’s introduction of WLTP and the ensuing rush to buy cars that caused a consequently high comparative level from last year. The introduction of the next WLTP stage is not very far ahead, but a similar pull-forward effect as seen in 2018 is not [yet] visible.

Rental companies, dealerships and car manufacturers remained stable with only a +0.2% change. Looking on the significant growth rate of 14.9%, however, it is conceivable that some fleet managers have already made additional purchases in order to avoid possible delivery bottlenecks in the coming autumn, Dataforce added. By contrast, new private car registrations climbed only moderately by +2.6% in July.

Volkswagen led the market, followed by Audi and Mercedes-Benz, the latter of which took over from BMW in true fleet rankings thanks to an increase of 23.0%. Ford and Opel in 5th and 6th place achieved even higher growth rates of 30.1% and 108.8% respectively. Behind the Volkswagen Group brands of Škoda and Seat, Renault and Volvo completed the top 10. A bit further down the brand ranking Hyundai (12th, +39.9%) and Kia (14th, +55.0%) both gained three positions.

Within Hyundai the models i30, i10 and Kona performed very well. At Kia the Ceed contributed most to the very positive result. The Ceed missed the volume of its sister model Hyundai i30, however, by just 14 registrations.

The performance of the Mercedes-Benz C-Class is undoubtedly worthy of mention as well, as it scored the highest volume growth by absolute figures of all models and ranked 3rd in its segment behind the Volkswagen Passat and Audi A4.

Of significant note were full electric vehicles with a 3.0% share, led by the Volkswagen e-Golf, BMW i3 and Audi e-tron, followed by the Renault Zoe and Tesla Model 3.