Vauxhall’s complete line-up of cars and vans will be fully electric by 2028 as parent firm Stellantis intensifies its EV offensive to deliver “advanced technology at affordable prices”. 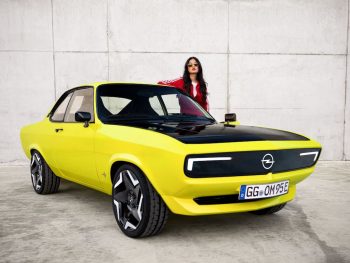 Opel is to revive the Manta name for a new EV, due mid-decade and following on from the Manta GSe ElektroMOD ‘restomod’ concept revealed this spring

The announcement was made at the online Stellantis EV Day 2021 yesterday, which saw the company – formed from the merger of PSA and FCA in January 2021 – announce plans to invest more than €30bn (£25.8bn) through 2025 in electrification and software, and build five gigafactories in Europe and North America by 2030.

All 14 of the group’s brands are committed to offering fully electric vehicles; the target is for more than 70% sales in Europe and over 40% in the US to be low-emission vehicles (fully electric or plug-in hybrid) by 2030, supporting Stellantis with plans to be a market leader here.

Vauxhall has already committed to offering fully electric models across its van range by the end of 2021 and, including the car range, its whole line-up will now be electrified by 2024 and then move to fully electric in 2028.

A new all-electric car that reinvents the Opel Manta will also arrive mid-decade. This follows on from the positive reception to the Manta GSe ElektroMOD ‘restomod’ concept revealed this spring and is in line with moves by other carmakers to revive classics. Sister brand Opel will also launch in China as a purely electric brand.

Paul Willcox, managing director, Vauxhall Motors, commented: “As of 2028, Vauxhall will only offer fully electric cars and vans in the UK. The future of the automotive industry is electric – and Vauxhall will lead that in this country. We are on a journey to reinvent Vauxhall and heading towards a net zero CO2 future – CO2 is the new currency in our industry.”

Stellantis added that its brands won’t adopt a ‘one-size-fits-all’ plan to going fully electric but will tailor electrification to suit their own DNA. Peugeot has already one committed to offering an electrified variant across its entire model line-up by 2023.

Vehicles will have a choice of four flexible BEV-by-design platforms and a scalable family of three electric drive modules, combining the motor, gearbox and inverter and able to be configured for front-, rear- and all-wheel drive. Battery packs will be standardised to cover all brands and segments, cutting pack costs by more than 40% from 2020 to 2024 and by more than an additional 20% by 2030. Solid state battery technology introduction is planned for 2026.

Key targets by Stellantis include affordability – it’s planning for the total cost of ownership of EVs to be equivalent to internal combustion engine vehicles by 2026.

It will also work on maximising driving range and rapid recharges – both key to widespread consumer acceptance of BEVs – with vehicles that will deliver ranges between 500-800 km/300-500 miles and with class-leading fast charging capability of 32km/20 miles per minute.

This will be supported through projects that enable the development of fast charging networks across Europe, enabled by a memorandum of understanding (MOU) signed between Free2Move eSolutions and Engie EPS – emulating Free2Move eSolutions’ business model for the North American market.

Stellantis also announced earlier this week that it’s investing £100m to turn Ellesmere Port into its first dedicated electric vehicle manufacturing site, safeguarding the plant’s future. Ellesmere will be used to produce both the LCV and passenger-carrying versions of the Vauxhall/Opel Combo-e, Peugeot e-Partner and the Citroën e-Berlingo, due at the end of 2022.

The Stellantis plans also incorporate hydrogen fuel cell electric vehicles – the brand has already said it will begin production of a hydrogen fuel-cell powered van by the end of the year.

Stellantis CEO Carlos Tavares said: “Our electrification journey is quite possibly the most important brick to lay as we start to reveal the future of Stellantis just six months after its birth, and now the entire company is in full execution mode to exceed every customer’s expectations and accelerate our role in redefining the way the world moves. We have the scale, the skills, the spirit and the sustainability to achieve double-digit adjusted operating income margins, lead the industry with benchmark efficiencies and deliver electrified vehicles that ignite passion.”