Electric vehicle sales are set to rise faster than ever but more policy action is needed to get on track for net zero by 2050. 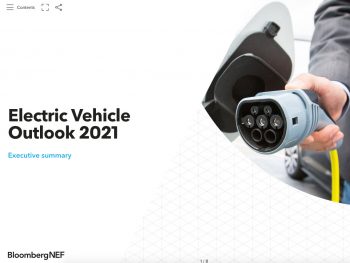 It’s the first BNEF report to explore what would be required to bring global road transport emissions onto a trajectory compatible with net zero by 2050.

With no additional policy measures, its modelling – dubbed the Economic Transition Scenario (ETS) – predicts that global sales of zero-emission cars would rise from 4% of the market in 2020 to 70% by 2040.

This would be far higher in markets such as China, the US and European economies – but lower levels of adoption in emerging economies will reduce the global average.

Under the same modelling, zero-emission LCVs will grow from 1% today to 60% of their market over the same time, while medium and heavy commercial vehicles will go from almost zero now to just over 30%.

As such, BNEF says that reaching net zero by mid-century will require all hands on deck, “particularly for trucks and other heavy commercial vehicles where the transition has barely started”.

And its new Net Zero Scenario (NZS) for the road transport sector sets out just how much work is needed to hit the net zero goal for 2050.

Zero-emission passenger cars, for example, would have to hit almost 60% of sales in their segment globally by 2030, not 34% as they do in the Economic Transition Scenario – that’s 55 million EVs sold in that year, as opposed to 32 million.

This will require decisive action from governments and policymakers as well as carmakers, according to BNEF.

Colin McKerracher, head of the advanced transport team, said: “2030 is only two model-refresh cycles away for automakers, so policy certainty will be needed very soon to make investments for a higher rate of penetration possible. This is particularly true for countries that do not already have tightening vehicle CO2 emissions or fuel economy standards. Early adoption is vital for building infrastructure and broader consumer interest.”

And action is particularly needed for the heavy truck segment – in addition to introducing tighter fuel economy or CO2 standards for trucks, BNEF says governments may need to consider mandates for the decarbonisation of fleets.

The report also says there are implications for investment, electricity demand and metals.

Under the Economic Transition Scenario, the charging network needs to grow to over 309 million chargers across all locations by 2040.

Home chargers alone would have to reach 270 million, public chargers 24 million, workplace chargers 12 million and bus and truck chargers 4 million. To install all of these would require over $589bn (£416.5bn) of cumulative investment in the next two decades.

BloombergNEF summed up: “The window for achieving net-zero emissions in the road transport sector by 2050 is closing quickly. An immediate increase in policy action is needed to bend the curve toward net zero. Investments in public transit and active mobility are an important part of the solution mix for net zero, as they can reduce demand for vehicles and vehicle miles, while also delivering a public-health benefit. Likewise, at the municipal level, tighter regulations for vehicles entering urban areas will help make the economics of zero-emission vehicles more attractive, especially for commercial fleet operators.”