eCall is to become mandatory in all new cars sold in Europe from next week, helping to save lives and reduce the severity of injuries. 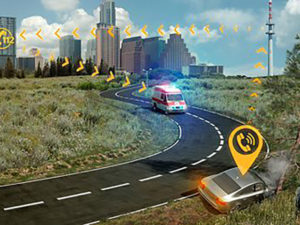 The in-vehicle system automatically dials 112 in the event of a serious road accident and, according to the European Commission, will reduce emergency response times by up to 40% in urban areas and even up to 50% in rural areas. The Commission estimates the technology could help save up to 1,500 lives per year.

“eCall has the potential to save many lives by shortening the reaction time of emergency services. This means that ambulances, fire engines and the police can intervene as quickly as possible within the ‘golden hour’ after a collision,” explained ACEA secretary general, Erik Jonnaert.

The system is designed to automatically call emergency response, including the vehicle’s location. In Europe, the system calls the standard emergency number 112. The system activates automatically as soon as an airbag is deployed. A driver can also manually use the feature, for example if they witness an incident.

The hardware sends a 140 byte “data telegram” including time of the emergency call, the vehicle type and location, the drive type, the number of passengers, the direction of travel, the way in which the emergency call was triggered and other information.

Furthermore, the technology is said to be the tip of a telematics-centric iceberg, with further functions and telematics devices all being linked in a vehicle allowing for V2X (vehicle-to-everything), including car-to-car information exchanges.