Ford has revealed its electric E-Transit van, arriving spring 2022 and equipped to help operators with up to a 1,616kg payload, a range of telematics services and a 350km range. 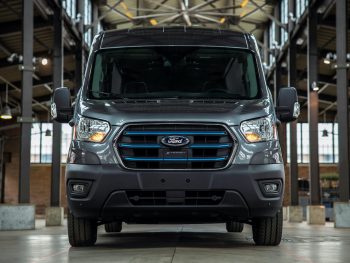 Bringing a much-needed solution for fleets looking to go green, especially for last-mile urban deliveries, the E-Transit is offered with a range of body, length, roof height and Gross Vehicle Mass options, giving 25 variants. Payload is targeted up to 1,616kg for the van and up to 1,967kg for the chassis cab models and it brings up to 15.1m3 of cargo space; the same as a rear-wheel-drive diesel Transit.

Performance details are yet to be announced but the electric motor, located on the rear axle, has a 269hp output and 430Nm of torque; said to be the most powerful motor of any fully electric cargo van sold in Europe. As with the Transit Custom Plug-In Hybrid, Ford will undertake widespread customer fleet trials with E-Transit in key European markets, starting during 2021.

As well as enabling fleets with green operations, including fixed drive routes and deliveries within geofenced zero-emission driving zones, the E-Transit can also cut fleet running costs. Ford says it can reduce service cost of ownership by approximately 40% compared with internal combustion engine-equipped models, as a result of lower maintenance expenses.

The battery, mounted underneath the body, provides a usable battery capacity of 67kWh, giving an estimated driving range of up to 217 miles on the combined WLTP cycle – roughly three times the distance the average European fleet driver covers daily, according to Ford. Drivers can maximise range by using a special Eco Mode, said to provide up to an 8-10% improvement in energy usage when the E-Transit is driven unladen by limiting the top speed and regulating acceleration.

It’s capable of using both AC charging and DC fast-charging. The onboard 11.3kW charger can deliver a 100% charge in up to 8.2 hours, while it can also charge at rates up to 115kW using a high-power DC fast-charger, topping up the battery from 15 to 80% in around 34 minutes.

The optional Pro Power Onboard turns E-Transit into a mobile power source with up to 2.3kW – possible uses include powering tools and equipment at worksites.

The E-Transit also comes as standard with the FordPass Connect modem, providing a range of connected and dedicated electric vehicle services available through the Ford Telematics fleet solution.

Advanced driver assistance technologies available include traffic sign recognition and intelligent speed assist, as well as a range of other features such as Pre-Collision Assist and Blind Spot Information System.

To provide reassurance, customers in Europe will get a one-year, unlimited mileage service offering alongside the eight-year, 100,000-mile warranty package for the battery and high-voltage electric components.

Sales and servicing is available at any of Ford’s 1,800-plus global commercial vehicle dealers – including its 1,000-strong European network of Transit Centres.

Vehicle conversions and modifications are also enabled through Ford’s work with hundreds of partners worldwide, who already provide compatible racks, bins and accessories on diesel-powered Transits.

The new E-Transit will be built in Europe at Ford’s Otosan Kocaeli plant in Turkey on a dedicated line alongside the Transit Custom Plug-In Hybrid. Vehicles for North American customers will be produced at the Kansas City Assembly Plant in Claycomo, Missouri.