Increasing taxes on road fuels could be one of the ways to help mitigate a future €12bn-a-year gap as a result of the UK’s departure from the EU. 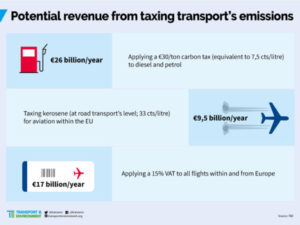 In a letter to President Juncker, Commissioner Oettinger and European Finance Ministers,  the leading economists said: “As the 2020 decade is approaching, European challenges require a common response to defend European security and freedom in a more dangerous world, protect Europeans from social injustice and climate change, and empower them through consistent support to research, innovation, training, mobility and civil society. More than ever, Europeans need a strong EU budget to tackle those challenges.”

The move was welcomed by eco campaign group Transport & Environment. The firm’s analysis finds that even a portion of the income from new measures such as a carbon tax on motor fuels, aviation kerosene duty, and ending the VAT exemption for flights within and from Europe would address the post-Brexit deficit. But the bulk of the additional revenue would go to member states – enabling them to, for example, reduce labour taxes.

Samuel Kenny, freight policy officer at T&E, said: “The EU has long considered energy taxes as a way to cut Europe’s emissions. Now, with a budget gap looming and some of Europe’s top economists backing the idea, the logic behind a green tax shift to transport, the biggest source of climate emissions in Europe, is more compelling than ever.”