By Contributor / 3 years ago / Interviews / No Comments 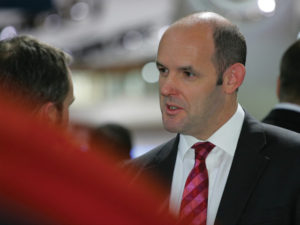 What are Kia’s aims and targets for the European fleet market with new and existing models?

We’ve now got a full range of cars and the Optima and Optima Sportswagon – particularly in mainland Europe – are really important to us because that’s where a lot of the fleet business is.

Kia is still a relatively young and retail-focussed brand and we didn’t really have the fleet infrastructure, but we’re creating that now. It’s a great opportunity, certainly in terms of C-segment, D-segment and SUVs becoming fleet prospects and we have the right product line up to do that.

We see real opportunity in fleet. Nearly 60% of our sales in Europe are to the private market – almost the reverse of the market average. That’s down to our focus on private market growth and we’re still relatively supply constrained.

We’ve used the UK as the business model, we’ve created all the material and shared it with all the markets. It’s effectively a roll out of the UK programme to the rest of Europe.

What are your initiatives for keeping fleet costs down for companies?

We’ve talked about the issue of Total Cost of Ownership (TCO) and a key element is always the service and maintenance costs. We don’t have a fleet services programme, so we’re looking now at package servicing programmes for fleet.

Obviously, with our white label fleet partners, we’re looking at offering maintenance, full service, leasing packages, but the opportunity is how we keep the service, maintenance costs low. I’m pushing every market to have service maintenance programmes in place, with a very clear message – ‘this is the cost of maintenance for the vehicle’.

We’re not there yet, but our aim is that people will know the total cost.

Are there any changes to Kia’s electrification plans considering recent announcements such as the UK government’s plan to ban diesel and gasoline vehicles by 2040?

We’re moving on all these technologies, but we don’t believe there’s a silver bullet. Instead we’re working on electrification, with electric Soul already available in all markets and new vehicles launched in Frankfurt.

We have plans for mild hybrid, not to be announced just yet. So we’re looking at all the different solutions, that will enable us to get where we need to be. Particularly 2020 with the CO2 targets, obviously NOx levels are coming into high focus considering what’s happened in Germany – with the changes to the testing programme. We already had these plans in place and how to deliver those solutions.

I don’t think the announcements made about banning petrol and diesel make a big difference to that, it’s a journey and we’re on the road already.

What’s your opinion on government emissions announcements, such as the UK?

It’s a headline story, but let’s be honest there’s quite some way to go to 2040. Personally I think we have to consider all the alternative powertrains, because I think clean diesel can be part of a future solution.

So I don’t think this is the death of diesel. Air quality is a major responsibility and we have to contribute to that as a car manufacturer – but I don’t think we should rule out any particular technology for 20 years down the line.

Do you think there should be more explanation to help understanding?

Manufacturer bodies such as the SMMT in the UK are working hard trying to make sure that out of these discussions people understand.

I think everyone’s aligned, it’s not that we disagree – clean air is the goal. We take our responsibility very seriously, not assuming that any particular powertrain will be decimated.

The reality is can we really go to 100% electrification? I’m not sure about the logistics, first how would we generate the power? Secondly, where would we put the charging stations in inner cities? I think it would be a real challenge.

What does the growth of the hybrids and electric mix in the Kia line-up mean for fleets in Europe?

As we’re not such a big player in fleet, I haven’t looked at this, but I can tell you that we sold seven times as many Eco cars as we did last year, mainly down to the introduction of the Niro hybrid.

We’re going to offer a plug-in hybrid version of the Optima Sportswagon and that will open doors for us into fleet customers, where maybe we haven’t had the opportunity before. With having products like Niro, we are seeing fleet customers moving into them as well, rather than sedan and hatchbacks. So having that alternative technology, will help us grow our fleet volumes.

Do you think on the flip side, hybrid and electrics will have a negative effect on the values of Kia’s diesel and gasoline cars?

It’s not had that effect yet, ironically we’re seeing hybrid sales grow as we’ve introduced Niro into the market. So far this year, the loss in the diesel market has gone to gasoline, it’s not gone into hybrid or electric. There will be some changes to that, we see opportunities to grow in some markets more than others Scandinavian markets, although Norway’s already an electric car market, the Netherlands and the northern European markets are moving towards plug-in hybrids.

So it varies region by region, but yes I think that growth in those technologies ultimately will draw sales from other powertrains, diesel is probably the one, inevitably. People have bought diesel for the efficiency, fuel economy and if a plug-in hybrid can start to offer that, diesel has not got such a good PR story – that’s maybe where the customers will drift.

What are your thoughts on people using cars rather than buying them?

We’re seeing it already to be honest – in a different way. Ownership is not as important to people as it was 20 years ago, we’ve seen it in the private market with PCPs and we’re seeing it with private leasing, which is still a use rather than an ownership programme, but it’s dedicated usage. I think there’s already that cycle of monthly payment, it’s a much more common way of buying a car rather than traditional HP.

So there’s that transition already, but I think people still want that dedicated usage.

What are your thoughts on autonomous cars and how do you feel it will effect the fleet market in Europe?

We’re moving closer all the time to full autonomy, it’s the technology in cars today, in terms of the vast driver assistance systems that we have. This means we’re inevitably moving closer to a car that basically is hands off, eyes off.

I still think there’s a long way to go though, not with the technology, but with all the other issues such as insurance, liability, concerns about hacking, that type of thing.

I think we have to almost accept this is the way, however long it takes and the technology will probably be there before all these issues are resolved.