Last year, Honda managed to overtake Hyundai to 5th place in the global automotive market rankings. The Japanese company is now setting its sights on the next chapter, with a clear new electric vision. 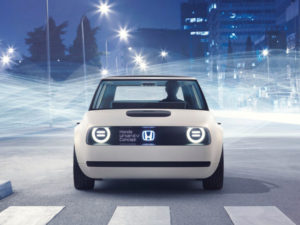 From robots to lawn mowers and power generators, to cars and motorbikes and, more latterly, the HondaJet – an executive jet that ranked as most-delivered in its category during the first half of 2017 – Honda offers an overwhelmingly diverse product line-up.

Sales revenue for the fiscal year ended March 31, 2018 amounted to ¥14.2tr (€107bn), an increase of 1.4% year-on-year. Operating profit amounted to ¥705bn (€5.3bn), a decrease of 16.1% compared to the previous fiscal year. In the mid-term, Honda expects to incur up-front expenses related to the introduction of electrified powertrains and automated driving technologies, however, it will establish a corporate structure to allow sustainable growth.

The company is jointly developing a compact hydrogen fuel cell system with General Motors and in addition has entered a partnership with Hitachi to create motors for electric vehicles. In the quest for autonomous vehicles, Honda is jointly researching the technology with Waymo, the driverless subsidiary of Alphabet Inc – the umbrella parent company of Google.

In the Japanese market, domestic automobile sales in the calendar year 2017 experienced a year-on-year increase for the first time since 2014. Freed, Fit and N-Box proved amongst the country’s best-sellers in their respective categories.

Meanwhile, in the US, where Honda introduced the all-new Ridgeline in June 2016 and all-new CR-V in December, unit sales exceeded 1.85m units, although this was down 5.4% on 2016’s figures. And, in February 2018, Honda built its 25 millionth automobile in the US.

In China, sales exceeded 1.44m units due to strong sales of multiple models including the CR-V, Vezel/XR-V, Accord and Civic. In response to demand, Honda is building a third Dongfeng Honda plant, with a target to begin production in 2019.

In South America, Honda had put its new Itirapina, Sao Paulo, factory on hold while the market had declined. However, following signs of recovery, automobile production will commence in the beginning of 2019.

Starting 1 Jan 2018, Honda Europe joined ACEA, while in April Tom Gardner took over as senior vice president from Philip Ross who retired from the business.

Following a late entry to the diesel market in 2004, Honda has already progressed toward an electric vision – announcing two thirds of sales are to feature electrified powertrains in Europe by 2025 and globally by 2030. The earlier date for Europe is due to particularly strong interest in the region. Honda Motor Co. president and CEO, Takahiro Hachigo, said: “Here in Europe, we see this move towards electrification gathering pace at an even higher rate than elsewhere,” adding that Europe was appropriate for the global premiere of the “next step” in Honda’s ‘Electric Vision’ strategy.

Cars including the new CR-V have had diesel dropped from the line-up and will instead offer the latest iteration of Honda’s proprietary hybrid technology; Intelligent Multi Mode Drive (i-MMD) hybrid system, comprising a 2.0-litre

Further electric models have been displayed on the motor show circuit, including the Urban EV, Sports EV Concept and NeuV. Takahiro Hachigo committed to the Urban EV Concept at the 2017 Frankfurt Motor Show stating, “This is not some vision of the distant future; a production version of this car will be here in Europe in 2019.”

A new fully integrated energy transfer system called Honda Power Manager Concept has also been developed, and will be on trial in western France and the UK, which can distribute electricity to and from the main grid, as well as direct power flow from renewable sources and manage the interaction of an electric vehicle battery connected to the home.

Moving closer still to an electric future, Honda is running a dedicated fleet of Clarity Fuel Cell vehicles in European demonstration projects, such as HyFIVE. The arrival of the new Clarity Fuel Cell in Europe is a key part of Honda’s ‘Electric Vision’.

However, despite the obvious electrified focus, at the start of 2018 Honda reintroduced diesel to the Civic range – for the first time in the new model. It features a “comprehensively revised 1.6 i-DTEC” that emits less than 100g/km CO2 and is claimed to produce lower levels of NOx emissions compared to the previous iteration of the engine. This may indicate Honda’s appreciation that diesel still plays an important role for fleets today. 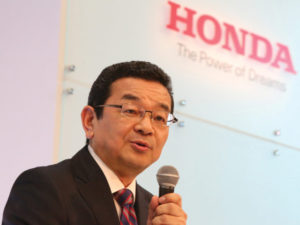 View from the top

Global models: We have been enhancing the global and regional models, which have long been strengths of Honda. The compact SUV Vezel/HR-V has grown into one of our global models. Sales of the all-new Civic have been strong everywhere. Sales of the all-new CR-V, which started in the US, are also off to a strong start. With various measures including the introduction of a hybrid version, we are going to further grow CR-V as a strong global model. Furthermore, the next-generation Accord will undergo a full model change this year, starting from the US.

Regional strength: In addition to these global models, our regional models have also been growing in each respective region. These models include the Mobilio and BR-V in Asia; the Ridgeline and Odyssey in North America; the Crider, Avancier and UR-V in China and the N-BOX in Japan. The WR-V, a regional model developed mainly by the Honda R&D centre in Brazil, is now being produced and sold in India as well.

Operating structure: We will advance our six-region global operation structure through inter-regional cooperation and coordination in order to further strengthen our global competitiveness.

Electric future: Honda has worked on the theme of the realisation of a carbon-free and collision-free society. We have identified the introduction of electrification technologies and advanced safety technologies as our highest priority. We are striving to electrify two-thirds of all automobiles we sell globally by the year 2030. In addition to the expansion of hybrid models, our development will put a central focus on hybrid-based models utilising a high-efficiency plug-in hybrid system unique to Honda. As we expect zero-emission vehicles will quickly become popular on a global basis, we will strengthen the development of fuel cell vehicles as well as battery EVs.