MG has previewed an electric version of the ZS SUV in China, with the newcomer set to re-launch the brand in markets across Europe in the first half of 2019. 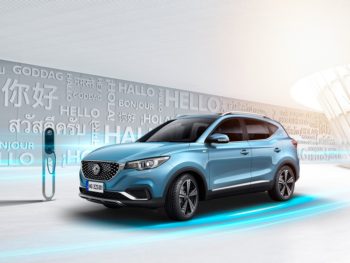 Revealed at the Guangzhou Auto Show, the eZS is based on the petrol-powered ZS SUV, which launched in the UK late last year and contributed to the company beating its 2017 sales volume by early August. MG said it had sold almost 100,000 globally, despite the UK being its only European market.

In the first half of 2019, the eZS will be the first MG sold in many European countries since the last TF roadsters in 2011.  It features a 148bhp electric motor, supplied by a lithium-ion battery under the cabin, which offers a range of 208 miles (335km) to a full charge. Around 80% of the range can be restored in half an hour, according to the company’s Chinese website.

“For us, the majority of our sales are in China which is all petrol, so the focus has to be on electric rather than a diesel for Europe,” Gregorious explained. “That’s the alternative for us. It’s not going into diesel and making that work, it’s going into electric – where the future is – and making that work for us, driving sales in the UK and European markets. It would be wrong to put a figure on it for the volume or percentage but [the share of plug-in vehicles] will be significant compared to the total mix of cars we sell.”

Previous: Kia and Hyundai tie up with Vodafone for connected car services
Next: Renault gets foothold in French peer-to-peer used vehicle sector