A new smart electric roll cover for pickups has gone on sale in Europe to address fleet concerns over security and water ingress. 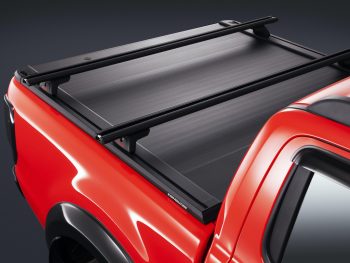 Developed by EGR Group after three years of R&D – and said to be built to the same standards as leading automotive manufacturers – the EGR RollTrac cover features a lightly textured black powder coat to make it both water- and scratch-resistant.

Tested in extreme conditions to deliver the best all-weather performance, it also uses a system of aluminium interlocking slats that’s designed to prevent water from penetrating while its flush mounting in the tailgate panel can ensure any surface water is immediately displaced.

The interlocking slat system design also helps prevent it from being slashed or cut, while the cover locks in the vehicle tailgate via claw hook-style catches; said to bring the best security in the market. In addition, an anti-pinch feature prevents anything from being caught – such as a child’s hand – between the cover and the tailgate when closing.

The tonneau also integrates with remote central locking, so a separate key is not required. Onboard buttons are neatly integrated into the rear corner on both side rails so that the cover can be opened/closed from either side of the vehicle.

The cover only works when the vehicle is unlocked, and a smart ECU-controlled operation is pre-programmed to the vehicle and includes onboard fail safes to prevent use if the vehicle battery is running low; a manual override feature is also featured.

James Horwill, director of strategic planning for EGR Europe, said: “Whether your teams are using their pickups for work, and have expensive tools or kit they need to keep safe in the back, or using them for leisure, and want to combine practicality with aesthetics, the new EGR RollTrac will make you think again about tonneau covers and what they can do.”