By Martyn Collins / 1 year ago / News / No Comments 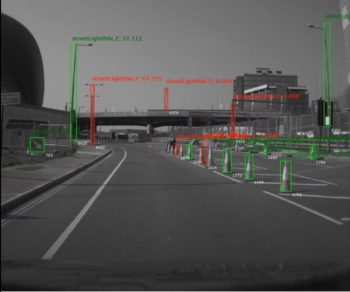 Northumbrian Water Group has become the first utility company in the UK to support the trials, with its fleet of vans and cars to be fitted with Mobileye’s 8 Connect, which includes automotive camera-based mapping technology and which will capture a street-level (worms-eye) view of the nation’s road network.

The overall result of these trials will be a dataset of Britain’s road network characteristics and street furniture at an previously unknown level of accuracy. In turn, this will lead to new data and asset monitoring services from Mobileye and OS across many markets, including connected and autonomous vehicles.

Initially, the trial will take place in selected areas of the country – including London, Manchester and the North East – and works by collecting data from the vehicles and sending it to the cloud for aggregation from where it’s passed to OS and referenced with its existing datasets; a brief test drive yesterday at the press event showed the level of detail recognised and classified was impressive. It included road markings, network boxes, traffic lights, road signs, lamp and telegraph poles, bollards, manhole covers, and drainage grates. The data is constantly updated too, with at least 10 passes of the same road needed to capture accurate information on the roads travelled.