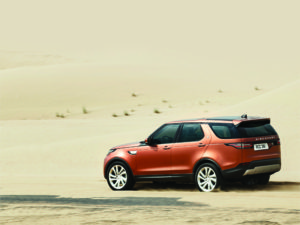 What the manufacturer said at launch:

Demand for Discovery has always been strong in our home market; the new Discovery will build on this, offering customers the most complete all-round SUV package available anywhere today. The new vehicle takes absolutely everything that is great about Discovery from its design, its versatility, its go anywhere, do anything credentials and builds on them to make it better in every way. The new Discovery is for the digital age. Ingenious technology keeps families safe, connected and confident on all surfaces, all terrains and in all weathers to ensure every destination is reached.

The price range of the Discovery lies somewhere between Evoque and Range Rover Sport. The look of the “Disco”, however, is closer to that of the Range Rover. Generally, the Land Rover family is well represented amongst those cars, which achieve the highest residual values. This does apply to the Discovery as well. The reason for the lower Spanish residual value grade lies in the registration tax in Spain, which is linked to the emission of the car. Because of that, there is a substantial amount to be paid for the Discovery and there will be no refund even if the car is being sold outside Spain.

About the residual value grades

BF Forecasts is an independent supplier of accurate and transparent residual value forecasts as well as used car value data for the past and current used car market. BF Forecasts has been providing such data to leasing companies (both captive and non-captive), OEMs, NSCs, major company fleets as well as to insurance and investment companies inside and outside of Europe since 1998.