Road Safety: An investigation into work-related deaths and accidents

By John Challen / 2 years ago / Comments / No Comments

How safe are the streets for fleet drivers and what is being done to reduce accidents? Dave Moss talks to people trying to make a difference. 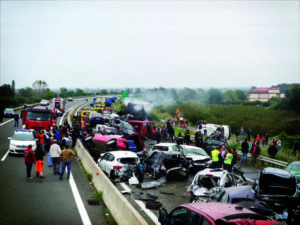 An investigation into work-related deaths and accidents

According to the Global Road Safety partnership, every day more than 3,500 people are killed – and between 55,000 and 135,000 seriously injured – on the world’s roads. In some countries, up to 60% of those who die are believed to be victims of work-related collisions, though exact numbers are unknown, as data varies greatly from country to country. European Union (EU) figures analysed by the European Transport Safety Council, (ETSC) show that 25,500 people died on EU roads in 2016 – with at least 40% of those deaths estimated to be directly work-related.

The Global Road Safety Partnership’s chief executive, Dave Cliff, points to a major conflict underlying these statistics: “Death and injury on the roads place huge health and economic burdens on countries, communities, and individual victims,” he says. “Yet the risk to people is regarded as small. Many of us think, ‘it won’t happen to me…’ but at an individual fleet level, this is why some managers fail to understand the full risk faced by them or their employees on the everyday driving task.”

In Europe, where over 50% of cars are fleet-operated in some countries, the ETSC is leading calls for company senior management to make road safety a priority. “Road collisions can affect many parts of a business,” says ETSC executive director Antonio Avenoso. “Fleet managers will look first at insurance costs and vehicles being unavailable. But others will have to deal with employee absences, driver training and the like. The effects and responsibility are spread around. That’s why it’s so critical senior management make road safety a company-wide priority, ideally at chief executive level.”

Pat Sheehan, UK head of health and safety for international transport infrastructure group Colas, agrees that taking the subject seriously is vital. “One of the fundamental points when developing a driving policy is ensuring its led and supported by those at the very top,” he says. “Otherwise, companies will face an uphill task in changing their road safety culture.” Avenoso points to another good reason for senior management involvement – at-work driver safety improvements can boost the bottom line. “Companies can make big savings on insurance costs and repairs, reduce employee injuries and related absences – and see benefits such as improved customer satisfaction,” he says.

Little official data covers the hidden costs of crashes and injuries in lost time or productivity, or the social costs of work-related traffic collisions. However, research by the British Occupational Road Safety Alliance suggests the full costs of road crashes are nearly always much higher than resulting insurance claims. It reports that for every £1 (€1.15) recovered by companies, between £8 (approximately €9) and £36 (€41) may be lost through uninsured costs. A European Commission Mobility and Transport Directorate study quoted annual company cost figures for work-related road collisions in Britain at £2.7 billion (approximately €3.1bn), with US annual crash costs averaging $US54.7 billion (€46bn) – around 13-15% of total fleet spending. In Australia estimated annual work-related road crash costs were around $AUS 425 million (€284m) with average lost working time from such incidents greater than for any other workplace injuries.

Numbers such as these suggest that formal at-work road safety policies are fast becoming essential for any size of company – but Avenoso expects it to take time. “Small businesses in particular lack resources and management can be distracted by other pressing worries. But there is change; telematics can help get an overview of what’s happening with company vehicles on the road. Another issue is the grey fleet – many companies don’t take commuting seriously, or pay attention to what happens when drivers use their own vehicles for company work.”

Though many risks facing at-work drivers are similar to those faced by any driver, amongst them drink driving, fatigue, speeding and distraction, Pat Sheehan underlines the scale of company responsibility for drivers on business. “Occupational road risk is one of the highest risks any company running a fleet will face,” he says. “Successful company safe driving policies will be very wide ranging, possibly with other policies, covering say drugs and alcohol, or mobile phone use, in support. They should apply to all drivers, no matter what the vehicle type, distance driven or company position, and have flexibility to allow changes,” he says. “These policies also need to be properly communicated, and understood by those affected.”

Why analysis can be key

Tony English, chief executive of fleet data technology supplier Isotrak, feels the first stage in understanding work related road risk is analysis of driver incident and crash data. “Knowing when and why incidents occur, and which drivers are likely to be involved, will motivate improvement programmes,” he says. “Managing journeys is another key factor, which can help reduce numbers of vehicles on the road – and time pressure on drivers.”

With excess speed a central issue in many collisions, Avenoso is particularly concerned over those at-work driver time pressures and stress. “Many workers are facing huge pressure to hit deadlines or delivery quotas, he says. “This is dangerous, and journey planning should leave enough room for delays – such as traffic or diversions.” Cliff shares big concerns about speed: “If everyone slowed down by even a few kilometres an hour, it would have an enormous effect on crash injury and death reduction. Impact speed always decides injury severity.”

Do you know your duty of care?

Official approaches to managing and enforcing work-related road safety (WRRS) vary widely around the world. Duty of care, occupational safety, and health and road safety compliance are legal requirements in the EU, where employers must undertake work-related risk assessments. In most of Europe, employers can be held legally responsible for employee involvement in work-related road collisions, and several countries provide detailed guidance to actively encourage employers to take action. In the UK, health and safety at work law requires employers to manage road risks, with organisations facing possible corporate manslaughter charges if serious management failures result in major “duty of care” failings.

The Global Road safety partnership believes more regional and national action is still needed: “Despite clear evidence about what works to reduce road risk, many countries have not enacted best practice legislation,” says Cliff. “Some countries still have very high drink drive limits, others don’t have adequate seat belt laws, and yet others have limited road policing.” Avenoso feels awareness of the issues is growing amongst fleet operators generally “Leadership to reduce work-related road risk is coming from many places,” he says. “Local and national authorities, companies themselves, and from the road safety sector, where consultancy services and telematics providers are making it easier for companies to develop a strategy. It’s good to see this – but there’s also a need for national and EU action, to help get the legal framework right.”

With many companies around the world apparently still lacking any formal policies, the ETSC wants businesses to recognise that much can be gained from improving work related road safety. Says Avenoso: “A collision resulting in death or serious injury can have a terrible impact on individuals – and also on a business. There are many benefits to improving road safety, some financial, others reputational. Don’t leave things too late; it’s a great investment.”

Helped by advanced technology, and publicly available ratings from organisations such as NCAP, safer vehicles are playing an increasing role in reducing fatal and serious injuries. Pressure is growing around the world to drive next-generation vehicle safety from its passive past into an interactive, automated and connected future.

Europe is amongst the leaders, having already reached agreement requiring future fitment of more life-saving vehicle technology. An example is the ‘eCall’ system, to be fitted in new vehicles from March 2018, which automatically contacts a Europe-wide emergency number following a serious road accident, and provides the exact vehicle location. It is estimated this alone could reduce fatality numbers by at least 4%, and severe injury numbers by 6%.

Already, various safety features must be fitted before vehicles can be sold in the EU. Last year the European Commission published 19 more safety technologies, likely to be added to the list when EU vehicle safety rules are next updated. Some are already appearing ahead of specific legislation around the world, especially Automated Emergency Braking, Intelligent Speed Assistance and seat-belt reminders for all passenger seats.

Alongside this, a European strategy on intelligent traffic systems has been agreed, described by the Commission as a milestone in cooperative, connected and automated mobility. This is expected to bring major road safety, emission and energy consumption benefits through vehicle-to-vehicle and vehicle-to-roadside infrastructure communication, starting in 2019. These functions will aid introduction of automated vehicles, which themselves promise a whole new range of road safety benefits.