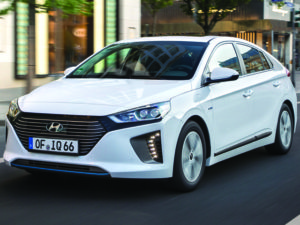 Although there’s no shortage of tax-efficient plug-in hybrid products on offer, Hyundai’s is different to most. Rather than trying to offer warm performance behind a short electric range, the Ioniq is laser-focused on efficiency, bolstering an already frugal hybrid system with the ability to cut exhaust emissions during local use.

This gives it only one direct rival – the Prius PHV. The two cars are similar in aerodynamic silhouette and evenly matched on performance and CO2 emissions, though the Hyundai has a price advantage and is the expected biggest-selling version, especially in fleet. That should give bigger volumes than the Prius PHV, which sells in much lower numbers than the regular hybrid.

The Ioniq Plug-In gets most of its drivetrain from the Hybrid. Its 105hp 1.6-litre petrol engine and six-speed dual-clutch gearbox are shared, and the latter is a welcome point of difference over the droney continuously-variable transmissions favoured by Toyota. But the Plug-In gets a power upgrade from the electric motor, which produces 60hp instead of 43hp, and the 8.9kWh battery stores almost six times more energy, offering a range of around 50km.

It’s a good all-round package. The electric range figure is realistic, there’s enough power to haul the Ioniq up to motorway speeds without burning fuel, and the 7kW on-board charger means it can be topped up in half the time of most plug-in hybrids on a suitable charging point. Once that range is depleted, fuel economy settles at 4.7l/100km under motorway or urban conditions, slipping seamlessly in and out of electric mode depending how hard it’s working.

The Prius has a slight advantage on economy, but the Ioniq has the edge to drive. It’s more agile, and the dual-clutch gearbox offers a sharper-responding Sport mode for bursts of acceleration, plus paddles on the steering column for extra control; qualities it balances with sublime high-speed refinement and supple ride quality on its relatively small wheels. Where the Ioniq Electric had to use a simplified rear suspension design to make room for the battery, the Plug-In has an independent setup from the Hybrid, and copes far better with rough surfaces.

Trim levels are aligned to the hybrid, and the two variants are similarly generous on standard kit, including touchscreen navigation with Android Auto and Apple CarPlay, dual-zone climate control and a package of driver assistance features, though the Plug-In adds LED headlights, larger wheels and a pair of charging cables.

Cabin quality is generally high, with soft-touch non-oil-based plastics and an air of durability to the switchgear. However, rear headroom isn’t the Ioniq’s strong point, and the Plug-In loses almost a quarter of the Hybrid’s load volume to make space for the battery.

Arguably, though, the biggest thing Toyota and Hyundai share is confronting a lack of public understanding. The Ioniq Plug-In is the way this technology should be used, but getting people to understand how it differs to most of its seemingly close rivals is a trickier problem to solve.

The Ioniq Plug-in teams the useful range of the Electric model with the efficient Hybrid drivetrain but loses out in desirability to the Kia Niro.