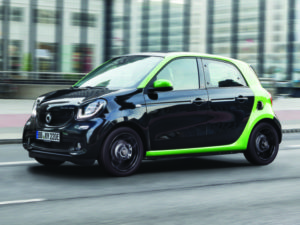 The pace of evolution in electric vehicles is unlike any other part of the market. Less than a decade ago, most were either low-volume, hand-built cars, or quirky short-range city runabouts. As battery ranges have grown, and vehicle choice has expanded, they’ve become less extraordinary to live with, and less extraordinary to look at, too. Which can only be a good thing.

That’s even true of the Smart line-up, though it might not look that way at first. The third generation of the Daimler subsidiary’s electric offering is now available with four seats as well as two, for example. It’s more powerful, travels a little further between charging stops, and although the lurid green panels are still optional, there’s a choice of more sedate colour schemes available for those who don’t want to shout about their eco credentials.

In theory, city cars are ideal for electrification, at least with the constraints of today’s battery technology, as they cover mainly short trips in areas of poor air quality. But those constraints also include a price penalty, which curbs the financial sense it can make to opt out of a petrol version. That’s likely to be a contributing factor behind the Renault Twingo not being offered in Z.E. guise, while the platform-shared Smart products can absorb it into a premium-brand price tag. The ForFour is expensive among its peers, this is even more so.

It’s a neat conversion; the 82hp motor is under the boot and drives the rear wheels, supplied with energy from a 17.6kWh battery beneath the cabin, now developed in-house rather than sourced through Tesla, as the old one was. There’s no loss of load space, aside from the bags of charging cables, while the folding passenger seat and clever rotating rear bench are carried over from the petrol ForFour.

With more power than the larger Renault ZOE, it’s also quite quick. Turning circles, though wider than the petrol version, are still incredibly tight and, with instant torque and only 1,200kg to move around, it’s suited to darting through city traffic. But pick options carefully; large wheels give a particularly firm ride around town, and produce lots of road roar at motorway speeds, which is more noticeable without engine noise to drown it out.

On the downside, it’s easy to spot cost-cutting measures. Digital radio is optional, the steering column doesn’t adjust for rake or reach (unlike the petrol ForFour) and charging speeds are low. Rapid charging is arguably a luxury with a small battery, but not having it confines this car to short trips while its key rival, the Volkswagen E-Up, isn’t. A typical range of around 80-90 miles, replenished in three hours, may limit its appeal.

Which makes this a bit of an oddity. The ForFour feels well suited to urban businesses needing a short-distance runaround, and perhaps for green-minded company car drivers or couriers. But, as clever as it is, there are more versatile options for those looking to switch to electric motoring.

What we think
A clever city car that seems ideal for electric power, but the cost of the technology makes it expensive and more of an environmental statement than a sensible business choice.