The Polo does so much, so well, that it could tempt buyers out of the Golf, reckons Alex Grant. 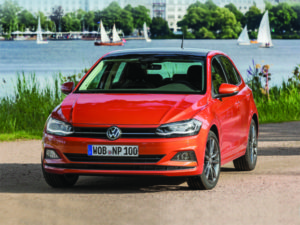 Volkswagen was an early contender in the supermini class with the first Polo. Launched in 1975, as it was moving from Beetle-derived products to modern water-cooled engines and technology, from Audi subsidiary NSU, it’s now a segment stalwart. More than 14 million Polos have sold worldwide since.

The Tiguan and Passat are bigger players in fleet, but the Polo is Volkswagen’s second biggest-selling car overall, despite being part of what’s become a much broader product range. This sixth-generation car arrives at the end of the year, only a few months after an all-new version of its long-running rival, the Ford Fiesta.

For the first time, the Polo is on the same platform as the Golf, albeit a downsized version. It’s just over the segment norm of four metres from bumper to bumper, but with a wheelbase only 20mm shorter than the last-generation Golf, discontinued just five years ago.

With no three-door version, entry-level pricing has shifted up slightly between generations, starting at just under €13,000 in Germany, though Volkswagen claims equivalent versions are actually cheaper this time. Trim levels are familiar from the old one, with demand weighted towards the mid-spec Comfortline in most markets. The sporty-looking R-Line, and Beats edition with a high-powered audio system, are both offered with a range of engines, while the 200hp GTI version will follow at the end of the year.

Perhaps a sign of the times, the Polo is launching with a choice of three 1.0-litre three-cylinder petrol engines, producing 65hp, 75hp and 95hp, the most powerful of which is the likely best-seller in most markets, and the only one offered with a DSG transmission. It’s a responsive and remarkably quiet engine with barely any vibration through the cabin, even under load and while idling, and on paper it’s the most efficient of the three, when fitted with a five-speed manual transmission.

Diesel versions are less popular in the Polo than they are in the Golf. Volkswagen will offer two 1.6-litre TDIs in the new car, with 80hp or 95hp. It’s an engine that’s prone to emitting a dull mechanical drone, and doesn’t suit this car as well as the livelier, better isolated and significantly quieter petrols. For those who want diesel, it’s due shortly after launch, alongside the GTI, a 150hp 1.5-litre TSI petrol and a 115hp 1.0-litre TSI that, based on our experience with the latest Ibiza, will be a fantastic fit in the Polo.

Expanding dimensions aside, it’s become every bit the downsized Golf. Head, leg and shoulder room are impressive, particularly in the back, and the boot capacity matches the Mk6 Golf, with a long, wide floor that drops into a hidden compartment or extends over flat-folding rear seats. Low-speed ride quality and high-speed refinement are on par with cars in the class above, but without numbing its compact agility.

But it’s cabin quality that really sets this car apart from the competition. Precise lines, consistent use of materials, and the contrasting panel that runs across the dashboard all offer a feeling of premium-class attention to detail, without needing to opt for top trim levels. That’s also true of the infotainment; a 6.5-inch touchscreen is standard, while glass-fronted 8.0-inch versions (with or without navigation) come in on higher trims, and the digital instrument cluster – as offered on the Golf – is a segment first.

So, just as Volkswagen makes noises about growing its SUV line-up and moving into electric mobility, the Polo is a well-established name that’s become a star in the range. The new Polo is easily good enough to question a need for anything bigger.

Fleet fact
The first five-door Polo launched in 1995; it’s now the only bodystyle.

What we think
The Polo feels grown up enough to dissuade some drivers to move up to a Golf, though high-mileage drivers will find a better selection of efficient diesels in the Polo’s larger sibling.