The Government is being urged to revise its plans to introduce Automated Lane Keeping Systems (ALKS) onto UK roads from early 2021 as they will “put road users’ lives at risk”. 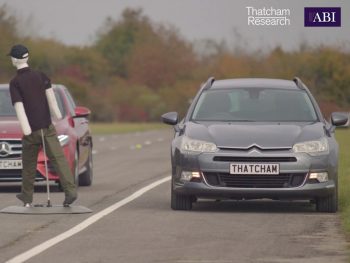 ALKS technology may not detect a pedestrian encroaching onto a carriageway, according to research by Thatcham

The plans could see automated driving become a reality on UK motorways as soon as spring 2021 – but Thatcham Research and the Association of British Insurers (ABI) have said they have serious concerns about this and warned that the plans threaten road safety.

The proposals – under a consultation that finishes 23:59 on 27 October – would allow the safe use of the system in the UK at speeds of up to 70mph. The technology builds on existing lane-keeping systems that provide nominal assistance and will actually take over control of vehicles at low speeds, keeping them in lane on roads such as motorways.

This is a significant step because it will mark the first time a driver can legally take their hands off the wheel and their eyes off the road and allow their vehicle to drive for them.

But Thatcham has warned that while drivers might believe the tech can be completely trusted to do the job of a human driver, such systems are largely based on today’s Assisted Driving technology and are far from fully automated.

Matthew Avery, Thatcham Research director of research, explained: “Motorists could feasibly watch television in their car from early next year because they believe their Automated Lane Keeping System can be completely trusted to do the job of a human driver.

“But that’s not the reality. The limitations of the technology mean it should be classified as ‘Assisted Driving’ because the driver must be engaged, ready to take over.”

This includes pedestrians on motorways – a human driver would slow down or move out of lane to avoid hitting them but an Automated Lane Keeping System won’t be allowed to do this because it’s forced to stay in lane and so will continue at motorway speed towards the pedestrian, significantly reducing the ability to brake and avoid a collision.

Thatcham also warns that an Automated Lane Keeping System may not recognise a motorway lane closure and, even if it does, it can only stop in lane under the red ‘X’, creating an additional hazard. And such systems may not see debris in carriageways.

“Automated Lane Keeping System technology would need a quantum leap in development to be able to cope with these very real scenarios safely,” Avery said.

While both Thatcham Research and the ABI have said they “passionately” believe in the safe adoption of automated driving technology because it will ultimately reduce accidents, they have urged the Government to undertake further work with insurers and the automotive industry to ensure road safety is fully considered before introducing Automated Lane Keeping Systems.

James Dalton, ABI Director, general insurance policy, stressed: “We strongly believe the timings for the introduction of ALKS should be revised to prevent lives being put at risk.”

Thatcham’s Matthew Avery also said it’s crucial that sensor performance moves on dramatically before a system can be classified as ‘Automated’.

He concluded: “The Government’s proposed timeline for the introduction of Automated technology must be revised. It simply isn’t safe enough and its introduction will put UK motorists’ lives at risk.”

To have a say in the Government consultation on safe use of Automated Lane Keeping Systems, which closes 23:59 tomorrow, click here.