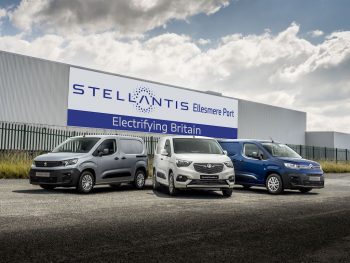 Ellesmere will be used to produce both the LCV and passenger-carrying versions of the Vauxhall/Opel Combo-e, Peugeot e-Partner and the Citroën e-Berlingo, due at the end of 2022.

The much-welcome news comes after years of uncertainty for the plant, including in recent months over whether Brexit and the UK government’s 2030 ICE ban would jeopardise its future. Speaking in January 2021, Stellantis CEO Carlos Tavares had said the ban was “brutal” and that a decision on Ellesmere would depend on the Government’s “willingness to protect some kind of an automotive industry in its own country”.

Announcing the investment today, Tavares said: “Performance is always the trigger for sustainability and this £100m investment demonstrates our commitment to the UK and to Ellesmere Port.”

He added: “Producing battery electric vehicles here will support clean, safe and affordable mobility for the citizens. Since 1903 Vauxhall has manufactured vehicles in Britain and we will continue to do so.”

The news follows work between Vauxhall and the Unite union to drive performance improvement actions at the plant.

Kwasi Kwarteng, Secretary of State for Business, Energy and Industrial Strategy, commented: “Stellantis’ decision to double down on their commitment to this site is a clear vote of confidence in the UK as one of the best locations globally for competitive, high-quality automotive production.

“Today’s decision will not only power Ellesmere Port into a clean future, but will secure thousands of jobs across the region in the supply chain. In this global race to secure electric vehicle production, we are proud to support Britain’s auto sector in this crucial transition as we work to build back better.”

The investment in Ellesmere includes a new body shop, upgraded general assembly, a compression of the site area and the creation of an on-site battery pack assembly – batteries will not be produced onsite, unlike with Nissan’s Electric Vehicle Hub announced last week for its Sunderland facility.

Work will also advance the plans for Ellesmere Port to be carbon-neutral by 2025 and the plant aims to be 100% self-sufficient for electricity, using wind and solar farms.

Stellantis has also announced the intention to consult on further investment into the Ellesmere Port site with the creation of a new UK parts distribution centre.

The plant at Ellesmere Port will celebrate its 60th anniversary next year. It was built in 1962 and produced its first car, the Vauxhall Viva, in 1964. Since then it’s also built the Vauxhall Chevette and every generation of the Vauxhall and Opel Astra.

Greeting the news, Richard Jones, managing director at Lex Autolease and Black Horse at Lloyds Banking Group, said: “This is the second announcement about the manufacture of electric vehicles in the UK in less than a week, a major shot in the arm for the country’s Road to Zero strategy and ambition to be leading the charge on sustainable transport.

“As the momentum continues to shift away from petrol and diesel, Government departments and industry bodies need to continue to work together to reassure even more manufacturers that the UK is the best place for EV development and manufacture. By ensuring the product supply and supporting infrastructure is in place, we can continue to help individual drivers and businesses accelerate their transition towards an electric future.”