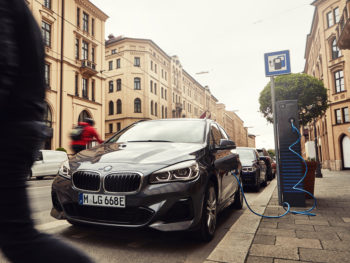 Electric range has been increased to 55-57km, while fuel consumption and CO2 emissions have been lowered

BMW said the advances are thanks to the latest battery developments, which also saw the BMW 330e and 530e PHEVs updated to reflect the same advancements.

As with the other recent BMW plug-in hybrid updates, the 225xe’s new-found efficiency does not encroach into the cabin any more than previously, with the battery taking up the same physical space as before, despite having grown in capacity from 7.7kWh to 10kWh.

The powertrain remains unchanged, with both 1.5-litre petrol engine (a de-tuned version of the same unit used in the BMW i8) matched with a pair of electric motors (one helping drive the front and the other the rear wheels). Total output is now a combined 224hp and 385Nm torque, with acceleration from 0-100km/h taking 6.7 seconds.

The rest of the specification largely remains unchanged, with the car featuring all the standard eDrive modes as before to control hybrid and electric modes. In addition, standard spec includes 17-inch alloy wheels, sat nav, 2-zone automatic air conditioning and auxiliary air conditioning, which can be controlled via a smartphone app to, for example, preheat the interior remotely.

A new addition is an audible external sound in accordance with recent EU law, which is emitted at speeds up to 30km/h.

Reiterating the message of sustainability that BMW had already made with the recent launch of the 530e plug-in hybrid, the 225xe Active Tourer has a 33% smaller CO2 footprint than a 225xi Active Tourer, and 24% better than a 220xd Active Tourer, when running on electricity from average European power. If charged using renewable energy, however, the benefit increases to 56% and 50% better than the above models respectively.

The newly extended electric range and low CO2 emissions combination are enough to qualify the 225xe Active Tourer for reduced company car taxation in Germany, depending on fittings. Only half the gross list price is used as a basis when calculating the monetary benefit from private use of the company car, BMW said.