Bosch has developed new technology that it says could stop, once and for all, the debate about the death of diesel and ensure a future for diesel cars. 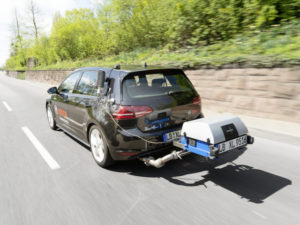 Announced at the company’s annual press conference, the ‘breakthrough’ technology can, according to the firm, cut nitrogen oxides (NOx) to “unprecedented levels”, enabling carmakers to meet future emissions requirements without the need for extra components. This would ensure diesels would be both low-emission and affordable while also retaining their comparative advantages to petrol in terms of fuel economy and CO2 emissions.

Using advanced fuel-injection technology, a newly developed air management system and intelligent temperature management, the Bosch diesels can achieve as little as 13mg/km of NOx under the required RDE cycles – down by some 92% on the current limit of 168mg/km and still 90% lower than the more stringent 120mg/km that will be required by 2020.

The technology has significant benefits in all driving conditions and cycles – even in particularly challenging urban conditions where test emissions were down to 40mg/km – prompting Bosch CEO Dr Volkmar Denner to say: “Diesel will remain an option in urban traffic, whether drivers are tradespeople or commuters.”

The Bosch developments would be further reinforced by artificial intelligence that would boost combustion engines’ performance – both petrol and diesels – and could mean diesels have no impact on air quality at all.

“We firmly believe that the diesel engine will continue to play an important role in the options for future mobility. Until electromobility breaks through to the mass market, we will still need these highly efficient combustion engines,” Denner said.

The announcement of the technology comes as diesel sales dramatically fall in Europe, leading a number of carmakers to look at ditching diesel engines from their line-ups, including Toyota. However, Ford’s UK boss has spoken out about diesel controversy, urging the Government to take action to end uncertainty as he said new diesels were “every bit as clean” as petrol cars.

Commenting on the Bosch announcement, ClientEarth – which has been instrumental in a number of air quality actions globally, including in the UK and Germany – treated the claims with scepticsm.

The firm’s clean air lawyer Ugo Taddei said: “We’ve not yet seen a combustion engine that’s clean for people’s health and the environment and the car industry has shot itself in the foot when it comes to consumer trust. For diesel, it might just be too late.”

Previous: No diesel for Lynk & Co range
Next: Ikea partners with Renault for car sharing service