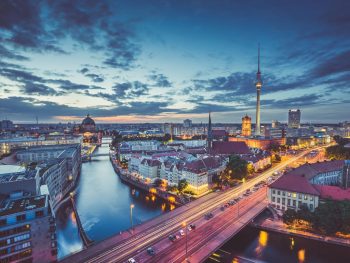 The German new car market reported a rise of 2.5% to the end of September

The automotive market is one of Germany’s great success stories and, little-by-little, the industry is getting less conservative. The German new car market reported a rise of 2.5% to the end of September 2019 to 2.67 million cars, up 2.5% in first nine months of the year.

Volkswagen remains Germany’s largest carmaker and, despite losing market share with weaker sales during the first nine months of 2019, the company’s Golf remains the country’s most popular model. Mercedes-Benz increased sales while Audi was again the third best-selling car brand on the back of weaker sales. In non-German brand news, Ford moved ahead of BMW in the third quarter of 2019.

The German economy, of which the automotive sector plays a huge part, is at a crossroads at the moment as it has experienced a slowdown in manufacturing. At the same time, employment rates are at record levels and inflation has continued to fall. Just as the economy is changing, so are the needs of vendors and consumer motorists.

In the wake of the diesel emission scandal, demand for new petrol cars continues to increase in the five major EU markets, according to the European Automobile Manufacturers’ Association (EAMA) except for Germany. The number of diesel cars registered across the EU decreased by 16.4% to 1.3 million units, with diesel’s market share falling from 36.3% in the second quarter of 2018 to 31.3% this year.

However, in Germany, demand for diesel recovered slightly – up 3.5% in the second quarter of 2019 – but on the other side of the coin it recorded the highest increase in registrations of alternatively-powered vehicles. Germany (+60.7%) recorded the highest percentage gains, as general traffic bans for older diesel cars in German city centres continues to gain momentum, particularly in Berlin, Frankfurt, Hamburg and Stuttgart.

At the same time German politicians have voted against the introduction of an 80mph (130km/h) speed limit on ‘autobahn’ high-speed motorway roads. Proposed by The Green Party, who argued that it would help curb emissions as well as improve road safety, nearly 80% of the Bundestag (Parliament) voted against the measure, which had already been dismissed by German transport minister, Andreas Scheuer, earlier in the year.

There is a lot of noise being made by the OEMs about hybrid and EVs, but generally German motorists are quite conservative and so the transition to get them out of their diesel or gasoline cars will take time. You cannot hide from the volume of media and marketing messages, but still the take up of low and zero emission is still relatively low.

The Porsche Taycan is perhaps the biggest signal that electric power is on its way for German car makers. And it’s not just in small to medium family cars, which has been the norm up until now with models such as the Nissan LEAF and BMW i3. The Taycan will become Porsche’s flagship model adopting the latest battery and charging technology.

The deployment of the latest online technology is just as evident in the used car industry. Since 1996, the Autorola Group has pioneered the online remarketing concept, arguing that moving cars, selling them through a physical auction and moving them again is not an efficient process regarding sale times, transport costs and the generation of unnecessary emissions.

The market is changing, as well as the big players who are looking for technological answers to their remarketing challenges, they also now understand how an online remarketing portal like ours can help dissipate lots of same colour, same model, same engine cars into the market without distressing its residual values.

Vendors use our e-auction facility and buyers from around Europe will bid on the cars. It provides a different channel and after their dealer network has been first offered the cars putting them on general sale via e-auction is the next logical step.

Such has been the uptake of online remarketing that the traditional used car auctions companies have been struggling as their business model no longer fits in with the modern-day vendor needs.”

Germany is at the heart of a large increase in cross border sales, many of which are powered by Autorola’s online portal. Thousands of active buyers are always looking to buy cars for other markets and many vendor cars are leaving German shores to other European countries, plus Poland, Africa and the Middle East. Many diesel cars end up in eastern Europe, while there is a growing trend towards German dealers importing German-built cars back into Germany.

Many high specification premium German and Italian cars registered in Italy often struggle to sell in the home market. German dealers will import them online back into Germany as they are well equipped and good value.

Overall, 150,000 used cars were either imported or exported via the Autorola online remarketing platform in 2018, accounting for 21% of total vehicles sold online. This growth is fuelled by vendors’ understanding that export can open up their stock to hundreds if not thousands more buyers.

Prices are listed on the Autorola portal for each car net of local VAT and taxes so buyers always know the exact price they will have to pay for export vehicles.

Used car values are becoming a higher priority to all asset owners, particularly when it comes to leasing companies and banks. Understanding the true value of thousands of used cars against their written down value on a monthly basis is at the heart of sound asset management practice, especially when the used market can change so rapidly. Get your valuation wrong and you could misinterpret the value of your fleet by millions of Euros.

The price is right

INDICATA, Autorola’s real time vehicle pricing portal is being used to bulk value used cars. OEMs are using the INDICATA data warehouse to gain a second opinion about used values, while banks want to reassure shareholders, they are managing their book valuations using real time values. Automating this process via a bespoke dashboard is saving vendors time and effort and, at the end of the contract, is also helping make a better qualified decision on what reserves to set to ensure a fast and profitable sale in the used marketplace.

So, the German market continues to move with the times and looking towards adopting technology to help it improve efficiencies at every touch point along the supply chain.

Calls for greater fiscal stimulus grew ever louder in October in Germany in tandem with heightened concerns of a technical recession in the Euro area’s largest economy. The external sector likely continued to drag on the economy in the third quarter, with exports contracting slightly month-on-month in July–August.

Exports are a key driver of business activity in the industrial sector, and thus output in the sector also fell in the same period despite a marginal rise in manufacturing production. Moreover, the manufacturing PMI fell to its lowest level in over a decade in September, as trade tensions and the global slowdown continue to suppress sentiment. On the other hand, domestic demand seems to have held up well in the third quarter. Retail sales growth picked up noticeable steam in July–August from the second quarter, while the labour market remained tight and consumer confidence resilient, boding well for private consumption.

The German economy should gain some steam in 2020 on strengthening exports and recovering industrial production, while domestic demand is likely to remain resilient. However, external headwinds continue to cloud the outlook and stem from global trade tensions and Brexit dampening demand for European goods.

Potential US tariffs on European cars poses a further risk. FocusEconomics Consensus Forecast panelists expect the economy to expand 0.7% in 2020 – down 0.2 percentage points from the previous projection – and 1.3% in 2021.

Business sentiment in Germany was stable at 94.6 in October from the prior month; however, the underlying data revealed that businesses became more pessimistic regarding the current climate and slightly less downbeat on business expectations.

Sentiment among manufacturers ended its downward spiral: goods-producers are noticeably less negative regarding business expectations, although their views on the current climate moderated slightly. Additionally, for the first time in over six years, capacity utilisation fell below the long-term average of 83.7%. Confidence in the trade sector, meanwhile, improved on greater expectations in wholesale, but views on the current climate were less rosy across the sector.

Carsten Brzeski and Inga Fechner, chief economist and economist at ING Germany, respectively, commented that the latest release brought “some relief to Germany’s economic toxic mix” of external headwinds, the global manufacturing slump and domestic structural weaknesses. “What is worrisome currently is the fact that the services sector seems to have lost its immunity against the manufacturing slowdown.” They added that, as such, “calls for German stimulus will not hush any time soon”.

Previous: Focus on North America
Next: Opinion: The wonderful(!) world of WLTP