By John Challen / 3 years ago / Comments / No Comments

Autorola Denmark country manager Thomas Friis Pedersen details the health of the Danish new and used car markets, and examines the impact of the growth of personal leasing on the overall market. 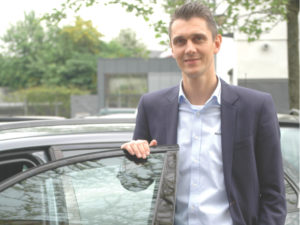 Volkswagen, Peugeot and Opel consistently dominate the manufacturer league tables with typically their A and B segment cars. However,  a reduction in the registration duty on new cars from late 2015 from 180% to 150% is gradually seeing a growth in larger cars which historically have been prohibitive to buy.

“Danish consumers don’t want to own their cars or homes any longer. They want to free up their money and are taking advantage of these new tax changes by spending more disposable income on bigger cars,” says Pedersen.

Like so many European countries the leasing market is helping contribute to much of this growth, with leasing volumes growing from 38% in 2015 to 43% at the end of 2016.

There have been two major growth areas, a major growth in van leasing and the increase in personal leasing, both areas where Autorola is the market leader of inspection and online remarketing services.

“The Danish economy continues to grow and businesses are using leasing as a cost effective way of buying a new light commercial to help fuel their expansion. Van sales have grown by around 25% since 2014 as a result,” says the country manager.

“Manufacturers are also making personal leasing very attractive not just with low interest rates, low deposits and low monthly rentals, but the flexibility of leases are such that a consumer can walk away from a lease after just a year by giving just one month’s notice. Consumers are turning these agreements into short term flexi leases which the Danish market hasn’t seen before.

“This trend is fuelling the growth in 12-18 month old used cars coming from the lease sector, which is traditionally the replacement cycle adopted by rental companies,” he adds.

Rather than risk flooding the market full of nearly new used cars both sectors have reacted very positively to the situation by creating new retail brands where consumers can buy a subscription to a nearly new car and then hand it back after a minimum of three months.

Leasing and rental companies are generating three to four more paid subscriptions before they are selling the cars into the used market when the car is still only 30-36 months old. “We have had to revise our business model by providing inspection and refurbishment  services to the same car a number of different times before it is eventually sold on our online remarketing portal,” says Pedersen. “This more flexible approach to car ownership has been greeted positively by the consumer and generally used cars prices continue to stay strong in the market.”

Used car prices have also been helped by the reduction in registration tax from 180% to 150% as this tax is incurred on used as well as new cars. This has meant a greater demand for Danish cars for export, where previously buyers were put off by the high prices.

One major challenge for motor dealer groups in the coming months is the change in tax regulations. Normally Danish used car dealers can buy used cars including tax and VAT, but now the majority of returned vehicles from the leasing industry are without tax and VAT.

So if the Danish used car market does not learn to manage the new Danish tax regulations, then there will be almost no cars available for them to buy in the market and Danish leasing companies will be forced to export them.

There are more advantages associated with the Danish car dealers being able to buy cars without tax and VAT. There is a lower purchasing price for the car because the tax and VAT is only paid when the car is sold and registered by the Danish authorities.

The used car dealer will have lower financial inventory levels as well as enabling them to have more cars in stock for the same financial impact. This will give dealer groups who can manage this new legislation situation a major advantage in the used market.

The biggest export markets for Danish cars are Germany, Austria, Holland and France that typically buy three to four year old cars, while Polish buyers generally purchase the older stock which can then end up in any one of the many eastern European markets.

A growing number of personal leasing drivers are returning their end of lease vehicles back to one of Autorola’s eight storage centres across Denmark which also process tens of thousands of end of contract lease vehicles each year.

“Generally the Danish driver enjoys being part of the dehire experience. We have worked hard in our vehicle inspection and check in processes to ensure we use language that a consumer will understand,” says Pedersen. “When we take them through their end of contract inspection we have to justify their de hire costs before they will sign their paperwork.

“Our inspection system automatically generates costed damage repair estimates identical to those used by the insurance industry. When we explain in detail on how a repair works including the cost of labour and materials generally the consumer accepts the dehire costs,” he adds.

Autorola’s Danish team regularly reviews the best remarketing strategy for its lease vendors and in recent years the most profitable approach is to sell the used vehicle online complete with damage, rather than having it repaired prior to sale. “We ensure all damage is estimated and accompanied by detailed images. Danish buyers are highly confident of buying online so offer a lower price for the vehicle that takes into account the damage. This approach speeds up the sale for the vendor,” reveals Pedersen.

Danish consumers were more upbeat in March, and their outlook on the economy improved.

Available data for the first quarter of 2017 suggest that Denmark’s economy is gaining traction on the back of better household sentiment after sluggish growth in 2016. Consumer confidence hit a fresh multi-month high in March thanks to an improvement in households’ perspectives for the economy in the next 12 months. Recently released data for Q4 2016 showed a robust acceleration in private consumption, supported by rising real estate prices and the associated wealth effects for households.

The economy is expected to accelerate moderately this year, mainly thanks to an improved performance in the external sector, along with increasing global trade. However, potential protectionist policies from several of Denmark’s trade partners form a downside risk. Panelists expect GDP to expand 1.5% in 2017, which is unchanged from last month’s estimate. In 2018, growth is predicted to be 1.7%.

Consumer prices rose 0.1% in March compared to the prior month, down from February’s 0.8% increase. According to Statistics Denmark (DST), the result was driven by lower prices for food and non-alcoholic beverages, which were offset by higher prices for clothing and footwear.

Inflation came in at 1.0% in March, mirroring February’s figure and marking the highest rate since January 2014. The Harmonized Index of Consumer Prices (HICP) climbed 0.9% in March from the same month of the previous year. (February: +0.9 year-on-year).

Danish consumers were more upbeat in March as their outlook on the economy improved markedly. The consumer confidence index came in at 6.2 points, the best result in 19 months (February: 4.8 points), as Statistics Denmark (DST) reported.

March’s survey reflected that consumers saw the general situation of the economy and their household’s financial situation improving markedly in the next 12 months. Moreover, consumers expect the unemployment rate to decrease in the coming year.