Lighten up: How vehicle developments are driving more cost-effective fleets

By Natalie Middleton / 1 year ago / Features / No Comments 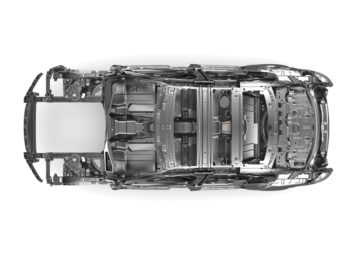 The Global Fuel Economy Initiative (GFEI) holds worldwide data showing that between 2010 and 2015, average new vehicle size increased by 3%, and weight by 5%. This data, it claims, is greatly undermining government efforts to reduce both fuel consumption and CO2 emissions.

Elisabeth Windisch, an analyst for the International Transport Forum, (ITF) an inter-governmental transport policy think tank, feels cars are getting bigger and heavier for several reasons. “People increasingly prefer bigger car segments, which has brought increased uptake of SUVs and so on,” she says. “But weights have increased because of more safety and comfort features, air conditioning, entertainment systems – and more passenger space. Advanced drivetrains such as hybrids with relatively heavy batteries and range-extender engines also add to the upward trend.”

John Johnston, chief engineer of body structures for Tata Technologies in the EU, points to safety system improvements as another key reason. “NCAP was one of the biggest drivers,” he says. “High speed crash tests became more severe, and the types of test increased.”

Based on an informal industry estimate that every 10% vehicle weight reduction could improve fuel economy by 6-8%, the GFEI believes government policies should begin discouraging weight increases – without delay. Johnston feels it may not be quite that easy. “Government legislation is now resulting in a need to cut emissions, and many of the ‘quick wins,’ such as improved aerodynamics and reduced rolling resistance have already been implemented. Weight reduction is a highly complex and difficult challenge.”

The GFEI feels that future national standards should include positive weight reduction incentives, by being based on vehicle size rather than weight and linked directly to manufacturers’ average economy targets. In Europe, where there’s been much debate over tougher emissions and economy standards due for 2021 and 2025, views also differ on whether the current weight-based standards should be replaced by a vehicle size or ‘footprint’ system – as favoured by both the GFEI and ITF.

The USA, with Canada, has operated a vehicle size-based approach to fuel economy regulations for many years. Since 2012, this has prompted manufacturers to develop so-called lightweighting techniques – in which aluminium has featured heavily – in working towards the upcoming 2025 CAFE 54.5mpg standard. However, proposed tougher post-2025 regulations are already being re-evaluated – and could be watered down.

Why lighter is better…

Chris Bayliss, deputy secretary general at the International Aluminium Institute, feels that any re-evaluation would be a mistake. “If the push towards tougher standards is relaxed, future vehicle efficiency will suffer. Investment to produce vehicles using more lightweight materials is expensive and needs new tooling. A full design cycle takes maybe five years, so if regulations don’t oblige manufacturers to keep improving vehicle efficiency, they probably won’t,” he reasons.

Matt Meenan, the Aluminum Association’s senior director of public affairs, believes the push towards lightweighting began long before emissions and economy concerns – for reasons still relevant today. “Over the past 40 years the adoption of aluminium has not been the direct result of regulation,” he says. “Automakers have to make vehicles that deliver on consumer demands for performance, efficiency and safety and it helps deliver on those demands.” Meenan feels the latest aluminium-bodied version of Ford’s top selling F-150 pickup, introduced in the US in 2015, perfectly demonstrates today’s consumer benefits. “It’s safer, with five stars rather than the four of its steel-bodied predecessor, with lower emissions, increased payload and towing capacity – and best-in-class fuel economy of any gas-powered pickup.”

Add in a weight saving around 700lbs (311kg) and global auto industry information analysts Ducker Worldwide’s latest growth forecast seems believable: by 2025, the company says, aluminium will comprise over 75% of US built pickup-truck body parts, 24% of large sedans, 22% of SUVs and 18% of minivan body parts…

For fleet managers looking hopefully towards lower operating costs from these trends towards lighter vehicles, studies have found that up to 75% of fuel used relates directly to vehicle weight. Less weight also reduces mechanical wear and tear, while secondary effects include shorter stopping distances, possible down-sizing of suspension and tyres – lowering costs and improving comfort, while brakes also get an easier life, potentially extending service intervals. An unlikely source could also provide a future lightweighting bonus, according to Tata Technologies’ Johnston: “There could be an argument that with fully autonomous vehicles, much of today’s passive crash structure and systems won’t be required,” he muses. “As the vehicle will never crash, there’ll be huge weight reductions…”

Cars will be different in future…

Aluminium’s place as probably the best established lightweight automotive material faces challenges from old and new materials alike, with new versions of steel, long the motor industry’s preferred choice, currently in demand. A recent US Center for Automotive Research report suggests use of lighter, advanced high strength steels will peak at 15% of total vehicle weight by 2020 – falling to around 5% by 2040 – as other lightweight materials gain ground.

One of those materials could be plastics, which make up around 50% of auto materials by volume in the US, but only around 10% by weight. Gina Oliver, senior director, automotive, for the American Chemistry Council plastics division, feels plastic has a big future. “America’s plastic makers believe they have virtually unlimited possibilities for innovative solutions in sustainable automotive design,” she says. “Plastics are replacing other materials, reducing assembly time and saving weight. Polycarbonate helps fuel efficiency, while maintaining important safety features. Used in sunroofs, it can lower a vehicle’s centre of gravity, making for easier cornering and accident avoidance – and in cars like SUVs and crossover hatchbacks. It could eventually replace glass.”

Upmarket European fleet models such as the Volvo XC90, BMW i3, Mercedes-Benz S and E Class, Jaguar F-Pace, and Land Rover Range Rover Sport are among today’s leaders in lightweighting techniques. Smaller premium vehicles are close behind – such as the BMW X1, Volvo V60 and Audi Q1 – but will lightweighting benefits ever reach mainstream fleets? “The need to reduce CO2 will continue to increase, so car lightweighting will continue,” believes Johnsoton. ”The introduction of ultra-high strength steels has contributed strongly to the process… For low cost, high-volume vehicles, steel will continue to be the future – unless the material costs of aluminium or composites fall drastically.”

Meenan has an equally firm but different view: “Multi-material vehicle construction will drive the future of automotive manufacturing – no longer will a single material dominate,” he says. “Despite advancements in lightweighting the industry has experienced in the past few years, much more can still be done. Aluminium in the last 25 years has seen a growth trend expected to continue for the next 25. However, additional lightweighting efforts depend on needs in the marketplace, the needs of automakers and the customer.”

Many in the US lightweighting industry see Ford’s decision to move to an all-new design for the F-150 pickup truck as the major turning point, when one of the world’s biggest car makers effectively signposted the future direction of the North American motor industry. The F series has been America’s best-selling truck for 37 years – and its best-selling vehicle for 32 of them, making the move to a lightweight design an especially bold move by Ford in its most important market.

The new vehicle, launched in 2015, continues in updated form today, and remains remarkably popular, with over 896,000 examples sold in the US last year – 9.3% more than in 2016. Its advanced design points to the way future light vehicles are likely to develop, with a new ladder frame chassis using much more high-strength steel than previously, and around 490kg of aluminium incorporated in the body. The resulting weight saving of around 311kg over the older all-steel version allows Ford to claim significant operator benefits, amongst them more towing and carrying capacity, alongside improved braking, better acceleration and fuel economy, and lower emissions.

Lightweight materials are especially important for hybrid electric, plug-in hybrid, and full electric vehicles – according to the US Department of Energy. (DoE) Using these materials in such vehicles can offset the weight of power systems such as batteries and electric motors, improving the efficiency and increasing their all-electric range. Alternatively, says the DoE, use of lightweight materials could mean a smaller, lower cost battery could be used, while keeping the all-electric range of plug-in vehicles constant.

In Europe, Tata Technologies says its research allows them to confidently predict that for current electric vehicles, 100kg of weight savings will result in only a 7km (4.4 miles) increase in range. In the short term – until battery technologies improve and the market focus is not purely on range, but on the energy used – they feel that the wisest investment for manufacturers will be to spend more money on a higher battery capacity.

Previous: Renault partners with energy firms to advance switch to EVs
Next: Trump’s tariffs – the impact on fleets