Trump’s tariffs – the impact on fleets

With his ‘America First’ mantra, President Trump is trying to protect his own county’s economy by proposing tariffs on a wide range of products – including imported passenger cars. Our man in North America, Mark Boada, assesses the possible impact of these tariffs on the fleet industry. 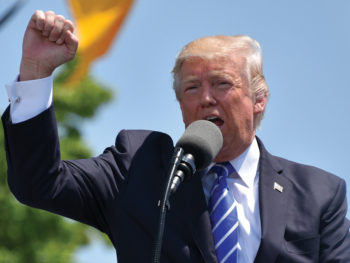 Even in the worst-case scenario, Trump’s tariff plans not quite as bad for the industry as they appear…

The news is awash with calamitous headlines about the Trump tariffs, not least of which proclaim potentially significant job losses for US autoworkers and price increases on both domestically made vehicles and imports. But I look at the headlines in view of a long-standing observation that people in general overreact to news, both the good and the bad – particularly to the bad.

Now, I’m not here to say that Trump’s proposed tariff of up to 25% on imported cars wouldn’t result in a crushing increase in the cost for the typical buyers of a Mercedes Benz, Toyota or even a sub-compact Hyundai. For its part, the Alliance of Auto Manufacturers, whose 12 members include the largest US and foreign OEMs, estimates that the measure would cost American buyers $45 billion a year, which global news service Reuters calculates as an average of $5,800 for each imported car sold in the US.

The impact of tariffs

However, it’s important to assess calmly and carefully what the impact of that tariff – which may be months away from implementation, if it happens at all – would be on US fleets, above and beyond the tariffs on imported steel and aluminium that went into effect on 1 July 2018. Truth be told, it’s not yet clear, but even in the worst-case scenario, it’s not quite as bad as it may appear. Let me count the reasons:

1) Many foreign-badged autos are made in the United States. As articulated so far, the tariff would apply only to vehicles assembled outside the US. But many of the most popular fleet vehicles made by foreign OEMs are assembled here. The list includes Toyota, Honda, Nissan, Subaru, Audi, BMW, Volkswagen, Hyundai and Kia. So even if the tariff, which is under study by the US Commerce Department, goes into effect, fleets that acquire these vehicles might well avoid it. On the other hand, many US-badged fleet vehicles are imported, most notably from GM and Ford plants in Canada and Mexico.

2) The resale value of in-service vehicles may rise. Used car prices are already rising as a result of the imported metals tariffs already in place, as well as the prospect that the import car tariff might go into effect. This could at least soften the blow to fleets.

3) The impact will be on a limited number of vehicles. Initially, the tariff would only apply to about a fourth to a third of the fleet’s inventory, at most – that portion of the fleet that is being replaced over the following 12 months. By the time that happens, the tariff may be smaller or non-existent, given the uproar from all corners, domestic and foreign, against it, and the possibility that the US proposal is merely an opening position for trade talks.

4) Fleet ‘right-sizing’ may offset higher acquisition costs. Many fleets have been making efforts to reduce the number of vehicles in their inventory, beyond those rendered superfluous by layoffs. Today, the ever-increasing availability of ride-hailing services and the emergence of car-sharing plans by OEMs may make additional efficiencies possible.

Even if the imported car tariff concept is nothing more than a Trump bargaining chip, it’s not to say that fleets won’t be hit by other measures. For one thing, the tariffs on imported metals means even the prices of bona-fide US-assembled autos will go higher, if only marginally, say, by one to two hundred dollars. For another, there’s the possibility of a stand-alone tariff on imported auto parts, of which virtually no American-made vehicle is free.

In any case, fleets already have been – or should have been – girding themselves for higher costs. Cars contain ever-more and expensive electronics, safety gear and exotic materials; fuel costs have been rising as the price of oil bottomed out more than a year ago and interest rates, which have been moving up for some time, are projected to go still higher over the next 12 months, as the Federal Reserve Bank raises short-term rates to guard against the inflationary pressures of full employment and wider federal budget deficits.

These make finding further fleet cost-savings increasingly important. The hope is that fleets will find them in greater fuel efficiency and lower accident costs from better safety performance.

One way or another, the Chinese seem to be getting their wish: as they say, “May you live in interesting times.”