Maxus to partner with 200 fleets for electric van launch

Maxus is to launch a line-up of large electric vans at the IAA Hannover this month, as part of parent company SAIC Motor’s plans to extend its brands’ reach across Europe. 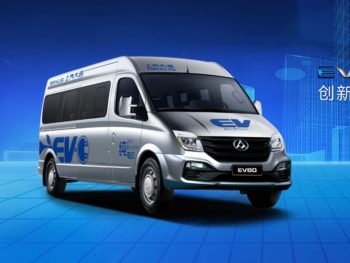 The EV80 is already in use with fleets in Europe

The updated EV80 will be shown in chassis cab, standard and high panel van, and wheelchair-accessible formats in Hannover. Accessible versions, developed with AMF-BRUNS, feature a bespoke lift system and can either hold four wheelchairs, or a single one plus eight passengers. It can also be turned into an eight-passenger electric minibus.

All versions feature the same 134bhp drivetrain and 53kWh lithium-ion battery, offering a 124-mile range and with AC and 30kW DC on-board charging capability. The latter enables a full charge in two hours. As a van, it features payload of up to 950kg, or up to 11.3 square metres of storage space, and Maxus said it has enough capacity in China to build volumes to suit all sizes of fleet order.

The EV80 is to be rolled out with 200 fleets across Europe as SAIC Mobility steps up its plans across the region. This will include selling the first MGs – starting an electric version of the ZS SUV – for almost a decade, and an LDV SUV sold with plug-in hybrid and battery electric drivetrains.