A British phenomenon, Jaguar Land Rover is as instantly recognisable today for its prestige brand offering, as it is for its heritage vehicles that made its name. Today, the company is undergoing unprecedented change… 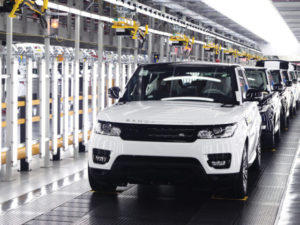 Today, the company employs more than 43,000 people globally and supports around 240,000 more through dealerships, suppliers and local businesses. Manufacturing is centred in the UK, with additional plants in China with Chery, Austria with Magna Steyr and latterly in Nitra, Slovakia, where cars are due to roll off the production line for the first time at the end of this year.

Being a predominantly UK-based manufacturer, Jaguar Land Rover has been hit hard by recent unpredictable changes, and with 50% of its raw materials coming from Europe, the new factory in Slovakia is designed to alleviate its concerns to some extent and enable it to remain competitive.

Despite the uncertainty, the company reported pre-tax profits of €1.7bn for the financial year ending 31 March 2018. Revenues increased 6% to €29.3bn thanks to high demand for new models in key markets including China and the US.

In 2017 Jaguar Land Rover sold a combined 621,109 vehicles – an increase of 20% over 2016 – in 130 countries. The increase in sales was driven particularly by new models, including the latest Land Rover Discovery, the award-winning Range Rover Velar, the long-wheelbase Jaguar XFL in China and continued solid demand for the Jaguar F-Pace.

Two all-new cars were also introduced in 2017; the I-Pace, Jaguar’s first fully electric car, and the E-Pace – based on the popular Range Rover Evoque. Other significant launches included the Jaguar XF Sportbrake and the first plug-in hybrid models of the Range Rover and Range Rover Sport.

Sales in China and the US helped offset weaker performance in the UK and Europe, which the company attributes to consumer uncertainty surrounding diesel models, Brexit and vehicle taxation. China was the company’s largest sales region in 2017 with annual sales of 146,399, up 23% year-on-year. North America reported a calendar year record with sales of 128,097, 9% up on the previous high in 2016.

However, it plans to invest in the region of €5.1bn in the 2018-19 financial year alone, demonstrating the massive increase in necessary investment to remain competitive and embrace new technologies.

From 2020, all new Jaguar Land Rover vehicles will be electrified. The company will introduce a portfolio of electrified products across its model range, embracing fully electric vehicles like the I-Pace, plug-in hybrids like the Range Rover P400e and mild hybrid vehicles (suspected to include the Range Rover Evoque), as well as continuing to offer its latest range of Ingenium-powered petrol and diesel engines.

However, with the global shift towards electrification, Jaguar Land Rover has been relatively slow in bringing to market an electrified model, despite having produced several noteworthy concepts over the past two decades.

Jaguar’s UK managing director, Jeremy Hicks says: “We’ve learned there’s a real appetite for plug-ins. We will have PHEVs across our range of vehicles and by 2020 all new cars will have a form of electrification, whether mild hybrid, PHEV or battery electric. And 13,000 have said they want an I-Pace.”

With the introduction of the I-Pace, Jaguar is putting itself head-to-head with the likes of Tesla that has become a household name for electric vehicles despite having sold reasonably small volumes globally.

In spite of this competition, Jaguar has focused on the vehicle itself rather than the surrounding technology, unlike Tesla, and has formed a long-term strategic partnership with Waymo (formerly Google’s self-driving car project) in a landmark deal that will see up to 20,000 vehicles join Waymo’s fleet in the first two years of production and the first Waymo self-driving I-Pace tests starting this year, eventually becoming part of Waymo’s driverless fleet from 2020.

In a further boost to the brand, together with Heathrow and travel services company WeKnowGroup and Jaguar signed a landmark deal in May that will see a fleet of up to 200 I-Pace available to passengers for travel to and from Heathrow, in the UK.

In January, Jaguar Land Rover also confirmed plans to open a software engineering centre in Shannon, Ireland, to support the development of electrification and self-driving systems for future vehicles.

View from the Top 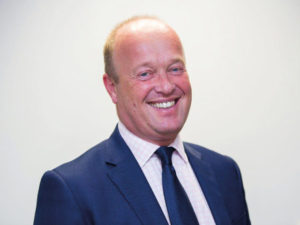 We’ve been quite selective about how we grow our volumes. We’ve always done okay in fleet but mainly in small business. For us it’s always about balance: we have retail strength other brands would die for, and they have fleet strength that we’d like to have a little of.

Which products are most successful?

We’ve been strong with low-emission cars; the eD4 being a prime example. With WLTP that will move everybody, as everyone is going to go up, and that will change the whole world for all manufacturers.

What we’ll see is a big change in the fleet market because so much was driven by CO2 and it’s becoming more important. I think we’ll see more people opt out of fleet cars and that’s where there’s a huge opportunity for us. We have strong residual values, a good range line-up and I think that will be a good opportunity in a changing fleet market.

How will electrification fit into the brand?

I think there will [be a fleet demand] and the fleet market will go through unparalleled change because of: TCO, taxation benefits, WDAs, WLTP; all these things coming in – change like never before.

What are your diesel concerns?

We can’t have a position where the CO2 from the fleet of cars went up, after years of going down. There’s no surprise to that; it’s because petrol sales have gone up. We’ve got to do the right thing for the environment, and I’m concerned we’re not. The debate is completely out of balance. We don’t mind selling petrol cars, we’ll sell PHEVs and BEVs too, but we’ve got to make sure customers are buying the right car for them.